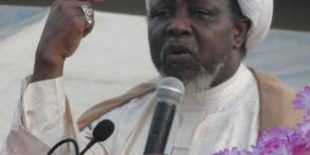 Nigerian Shiite Muslims has issued a statement indicting Nigerian troops of killing 11 of their members and injuring 40 others in a clash between the group and soldiers in Zaria.
According to the group, Mahmud, the son of the leader of the group, Sheikh Ibraheem Zakzaky, as well as a woman with a baby strapped to her back were among those gunned down were.

Ibrahim Musa, the editor of Al-Mizan, the weekly newspaper published by the group, said in a statement, “Reports reaching our news desk now indicated that some soldiers of the Nigerian army have opened fire on the tail end of the Quds procession held after Jumaat prayers in Zaria, Kaduna State.

“The procession, which took off from Sabon Gari Jumaat Mosque, reached Kofar Doka peacefully with no incident. However some soldiers attacked the procession at PZ junction in Zaria.

“They shot Mahmud Ibraheem Zakzaky, but [his body] was taken away by the Muslim brothers. But several [other] Muslim brothers were shot by the security agents.

“As at the time of writing this report, there is no confirmation on the number of Muslim brothers shot or killed by the soldiers, but our [sources] say five people were killed. The Quds procession was held today peacefully in more than 10 Nigerian cities. Why the attack on the Zaria procession?

“the latest report on the attack by soldiers on Quds peaceful procession is that ten Muslim brothers were gunned down by the soldiers, among them Mahmud Ibraheem Zakzaky, son of Sheikh Ibraheem Zakzaky, and a Muslim sister with her child on her back.

There are over 40 Muslim brothers’ casualties with different degrees of gunshots by the soldiers. The story is still unfolding, with reinforcement of soldiers coming from Kaduna, according to our news sources.”