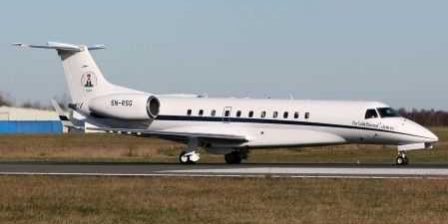 Embattled Rivers State Governor, Rt. Hon. Rotimi Chibuike Amaechi, this evening had his private jet grounded by the Nigerian Civil Aviation Authority (NCAA). The regulatory agency said it took the action because the operating licence of the aircraft had expired.

The foolish craze of acquiring private jets and other ostentatious trappings of life which is the hallmark of primitive African politicians, the so-called Pastors and Men of God as they like to be called took a twist recently when the jet belonging to Chibuike Amaechi was grounded. For the Governor of Rivers State this folly came to an end when NCAA Acting Director General, Joyce Nkemakolam, announced the grounding of his personal aircraft at a press conference in Lagos. Her speech was entitled the “Status of the controversial aircraft operated by governor Amaechi”.

Speaking on the plane which was grounded for about two hours on Friday in the Ondo State capital, Akure, for alleged non-declaration of manifest, Nkemakolam said: “The controversial aircraft on the service of Governor Rotimi Amaechi is operating illegally in the country.”

Continuing, she said: “The aircraft, a bombardier BD700, Global Express with registration no N565 RS has its clearance approval expired since Tuesday, April 2nd, 2013. “By our records, the last flight clearance for this aircraft was approved for operation on Thursday, March 28, 2013 on Accra – PH – Accra and to terminate on April 2, 2013. With this development, the aircraft has exceeded the extra two days or 48 hours leeway for it to leave the country.”

The controversial brand new Bombardier Global 5000 (N565RS) – which could seen in this picture – reportedly cost $45.7 million and then it was delivered to the Rivers State Government on October 7, 2012. Not even the Queen of England and Head of Commonwealth, Elizabeth II seen in the second photo alighting from a passenger aircraft on a state visit to Australia has a private jet. In the third picture Boris Johnson the Mayor of London who is infinitely more powerful than all the Governors in Nigeria combined is seen going to work on his bicycle. From Governor Rochas Okorocha to the General Overseer of Winners Chapel the craze is now the acquisition of aircrafts, yet the ordinary people on the streets are left to rummage in dustbins and refuse dumps to find something to eat. Whilst the people of Great Britain is ready to hang any politician caught diverting or embezzling public funds, Nigerians on the other hand have accepted the fate of servitude and absolute acceptance of their miserable poverty stricken existence.