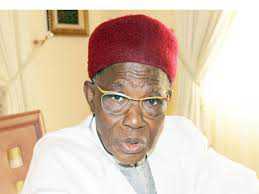 THERE is mounting tension in the ruling Peoples Democratic Party (PDP) over the composition of its seven-man national disciplinary committee headed by the second republic Transport Minister, Alhaji Umaru Dikko as most of the governors, members of the National Working Committee (NWC), members of the Board of Trustees (BOT) and other party elders were said to be kicking against it, describing it as another “political blunder” by its National Chairman, Alhaji Bamanga Tukur.

According to feelers from the National Secretariat of the party in Abuja,

the aggrieved party members were protesting that apart from the fact that Dikko was a former national chairman of one of the registered political parties who knew nothing about the PDP, they argued that he had been on sick bed for a very long time now that he had to be flown abroad by the Federal Government where he is currently receiving treatment.

“The choice of Umaru Dikko as the Chairman of the PDP National Disciplinary Committee is laughable, this very funny, it is another political blunder by Alhaji Tukur and his cohorts which cannot stand the text of the time. Dikko is a dominant member of the PDP, he was even the national chairman of one of the registered political parties, what does he know about the PDP? How can you bring a stranger just like that to make him the chairman of such a sensitive Committee?” a member of the BOT told the Nigerian Tribune in confidence while speaking on the development.

According to him, “Dikko is even sick, he had been flown abroad for medical attention, he is a personal friend to Tukur since their NPN days, the rest is history. He then appointed King A J Turner as the Deputy Chairman of the committee, he is creating way for Turner to chair the committee through the back doors, Turner is a well-known figure in the party as the strong supporter of President Goodluck Jonathan, and the roles he played in the Bayelsa PDP crisis led to removal of the former governor from office.”

Speaking further he said: “the only credible members of the committee are Chief Iwanyanwu and Alhaji Oyedokun, though they too are very close to the Presidency, but they are respected founding members of the party who had paid their dues in the party and who would not want to soil their reputations for anything, Tukur will have to explain how he arrived at the choice of the committee members, PDP has many credible leaders such as Dr Alex Ekwueme, Chief Solomon Lar, Senator Ike Nwachukwu, Senator Ken Nnamani, Professor Jerry Gana and a host of others if the party really means business.”

Though the Committee is yet to be inaugurated, Nigerian Tribune gathered in Abuja at the weekend that some concerned party leaders and governors had already raised the matter before President Goodluck Jonathan.