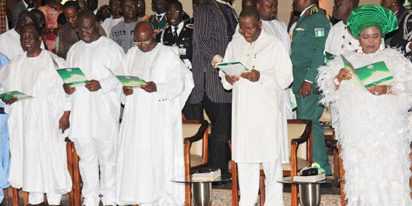 President Goodluck Jonathan said, yesterday, that the fight against Boko Haram terrorists has taken so long because Nigerians were not yet fully united to fight the menace.
Speaking at an interdenominational Church service to mark the country’s 54th Independence celebration, President Jonathan said when Nigerians are fully united, there is no problem that they cannot overcome.

Citing the case of Ebola Virus Disease which Nigeria has effectively contained, President Jonathan said despite political differences, Nigerians were able to unite across political, ethnic and religious divide to fight it.
“God knows that we have challenges and before they came up, God knew. Because of the prayers of Nigerians, we will overcome our challenges. God is with Nigerians and we will overcome our challenges. If we are united there is no problem we cannot conquer.
We were able to defeat Ebola because Nigerians were united and agreed that we should fight it. We have not defeated Boko Haram because Nigerians are not all united yet”, he said.
President Jonathan enjoined politicians to be cautious in their struggle for political space, saying the interest of the country should be the driving factor.
“When I listen to some comments by some highly placed individuals, I feel sorry for this country. There are some of us who, while struggling to get what we desire, forget that we can not get it if we destroy our country. So, if we come together, while pursuing whatever achievement we want, since we don’t have any other country than Nigeria, I am sure we will overcome Boko Haram.
“We were able to defeat Ebola because Nigerians agreed together to wage war against the disease. That is the strength of unity. Some of the challenges we are having, whether kidnapping or the greatest problem which is terror, it is because all of us have not united to fight these challenges.”
He commended the Armed Forces for their efforts at containing terrorism and called for  encouragement from Nigerians to do better.
“Let us commend the security services because if some of you know what they pass through, and the sabotage, you will appreciate the little they have done.”
In his sermon, President  of the Christian Association of Nigeria (CAN) Pastor Ayo Oritsejefor prayed for God to use the occasion of the independence day celebration to bring back peace and unity to the country.
The CAN president explained that all the problems facing Nigeria as a nation were self inflicted, including corruption and terrorism, perpetrated by the Boko Haram sect.
He said corruption in Nigeria was caused by poverty mentality as a result of people not being satisfied with what they have. According to him, the country’s woes were also caused by those who are desperate to take power.
Pastor Orisejefor, who noted that Nigeria was being troubled by Nigerians, said: “Troublers of Nigeria, get ready for judgement. It doesn’t matter what level you are, the judgement of God will find those who are troubling Nigeria.”
He disagreed with insinuations that the level of terrorism in the country was as a result of poverty. “Terrorism  is not fuelled by poverty but poverty can create an environment where more people can be recruited.”
Quoting from the Bible in Acts chapter 5, the CAN president also warned Nigerian women to desist from shielding their husbands who perpetrate crimes against the country.
Pastor Orisejefor stressed the need for deliberate steps to “de-radicalise those who are radicalised because of extremist religious beliefs”, addin that Nigerians should support the military.
The first reading was taken from the book of 1 Sam 30: 1-19 by Justice Walter Onoghen while Senate President David Mark took the second reading from Mark 4:35-41.
A special prayer which was sent from the Catholic Pontiff, Pope Francis I was read at the service.
Other dignitaries who attended the event included deputy senate President Ike Ekweremadu; deputy speaker Emeka Ihedioha; former head of state, General Yakubu Gowon; former head of Interim National Government, Ernest Shonekan; Secretary to the Government of the Federation Ayim Pius Ayim; Head of Service of the Federation, Ambassadors of Israel and Greece, the service chiefs and Arch Bishop Nicholas Oko, Primate of the Anglican Communion, among others.