President Jonathan to Gov Kwankwaso you’re a failure and desperate 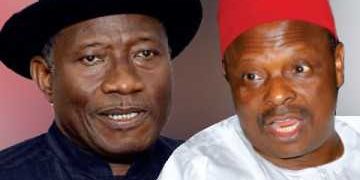 allegation that the President was out to kill him, two ministers apparently acting on behalf of the President blasted the governor in Abuja on Friday.

Separate statements issued by the Minister of Information, Mr. Labaran Maku, and Minister of Police Affairs, Alhaji Abdul Jelili Adesiyan, described Kwankwaso as “being desperate and paranoid.” They added that Kwankwaso’s outburst against the President was the height of irresponsibility and an indication of a failed governor.

In a statement made available to one of our correspondents in Abuja by Maku, the minister said Kwankwaso should explain to the people of Kano the role he and the All Progressives Congress played in the emergence of Mallam Sanusi Lamido Sanusi as the Emir of Kano, instead of dragging President Goodluck Jonathan to it.

Kwankwaso had on Wednesday accused the President of causing the crisis that followed the appointment of Sanusi as the Emir of Kano.

The governor also said the President should be held responsible for whatever happened to him, his family or the people of Kano State.

But in the statement signed on behalf of Maku by his Chief Press Secretary, Mr. Joseph Mutah, the minister said the governor was engaging in a campaign of calumny against Jonathan and the Federal Government.

Maku said, “It is a known fact that the appointment of traditional rulers is within the purview of state governments and it is surprising why Kwankwaso has chosen to drag the name of the President into the succession crisis rocking the Kano Emirate.

“Instead of throwing tantrums and casting aspersions on imaginary enemies, Kwankwaso should face the people of Kano and explain to them the role he and APC leaders played in the imbroglio.

“The Police in Kano have offered explanations why officers and men were deployed to guard the palace of the emir, yet Governor Kwankwaso decided to further his unbridled campaign of blackmail against the President and the Federal Government.

“The recent outbursts of Kwankwaso have lent credence to observations in some quarters that the governor is now afraid of his own shadow as the people of Kano become increasingly impatient with his years of one-man rule under which he imposes his will on the state in total disregard to the wishes of the people.”

Writing on his Twitter page on Wednesday, Kwankwaso had said his government followed the same process which his counterpart in Gombe State, Alhaji Ibrahim Dankwambo, adopted in appointing the Emir of Gombe.

He, therefore, wondered why the President should cause crisis in Kano State and accused him of plotting an “agenda which is not good for this country.”

The governor said it was a known fact that the Jonathan’s administration had enough security challenges which it should focus its attention on.

The minister said, “After the recent denial of freedom of choice for the people of Kano by imposing local government chairmen and councillors on them, he then took on the late Kano monarch shortly before his demise.

“Governor Kwankwaso, as is well known to the public, then went on a highly politicised selection process, turning the ascension to the throne of Kano into a partisan political enterprise during which prominent All Progressives Congress leaders and some governors moved to Kano reportedly to influence the outcome.

“The result is the outpouring of anger and protests in the ancient city of Kano with the unfortunate breakdown of law and order.

“Governor Kwankwaso is therefore singularly responsible for the violence in his state. The selection of successors to other traditional institutions in other parts of the North in recent years has not witnessed the kind of public anger and protests and violence that greeted the exercise conducted by Kwankwaso at the Government House in Kano.”

He added, “The police authorities in the light of the violent opposition to the highly political selection process for the new Emir of Kano only helped to restore law and order and to protect the historic palace of the throne of Kano from being razed or destroyed by aggrieved people of Kano.

“To turn round to blame President Jonathan or the Federal Government for the crisis is the height of delusion and irresponsibility on the part of Kwankwaso. He is the architect of the crisis and violence and if he has a conscience, he should examine his role in this unfortunate and needless crisis into which he has plunged the ancient city of Kano and its respected traditional institution in recent weeks.

“The latest claim by Kwankwaso is wild and outlandish and does not fit into the character of President Jonathan or the Federal Government of Nigeria.

“The Federal Government urged the people of Kano to remain peaceful and law-abiding, as well as shun violence “in spite of the highhandedness of Governor Kwankwaso and his associates.”

Also, the Minister of Police Affairs said it was unfortunate that instead of Governor Kwankwaso to appreciate the efforts of security agents in ensuring peace in his state, he was busy abusing Jonathan.

Adesiyan in a statement by his Chief Press Secretary, Wale Akinola, said the governor needed to be educated on the role of police and other security agencies in the society.

He said, “Police have the mandate to protect the lives and property of every citizen of Nigeria and Kano State cannot be an exception.

“When there is protest, the police should be able to protect people’s lives so that it will not lead to a major crisis and that was what the police did in Kano to stop youths who were dissatisfied with the appointment of Sanusi as the Emir of Kano.

“But instead of appreciating the efforts of security agents in bringing about peace in the state, Kwankwaso was abusing Mr. President.

“I think Kwankwaso needs to be educated on the role of police and other security agencies in the society as well as the functions of the President of Nigeria in order to give him an insight into their operational procedure.”

He said Kwankwaso’s outburst against the President was an indication of a failed governor who acts against the will of the people.

The minister added, “It is rather unfathomable that Kwankwaso could use the protest that followed the appointment of Sanusi as the Emir of Kano as an opportunity to insult the President of the Federal Republic of Nigeria the way he likes.

“His recent outburst is an indication of a failed governor who acts against the will of the people.

“Have you ever seen the opposition party insulting the President of the United States of America, or the Prime Minister of the United Kingdom, or Chancellor in Germany?

“It is only in Nigeria that those who lack patriotism like Kwankwaso can insult the President at will.

“Rather than reflect and ever remain grateful to PDP for giving him the platform to become a governor and a minister, Kwankwaso now has the audacity to abuse the President.

“While I recognise the inalienable right of citizens to hold opinions and identify with political platforms of their choice, I find it very difficult to understand the type of bitterness that has taken hold of an elected person like Governor Kwankwaso who hugely benefitted from the PDP on which platform he was twice elected governor in addition to being appointed minister.

“Kwankwaso has not only shown his aversion to the unity of the nation but also the agenda of his party, the APC, to attack well-meaning individuals and leaders as a means to cause confusion among Nigerians and destroy our oneness as a people.”

Asked to react to the ministers’ statements, Kwankwaso said he had no comments.

Speaking through his media aide, Baba Dantiye, he said, “We have no more comments on this. We are busy with the convention.”
Sourec Punch