President Jonathan rushes back from Malabo 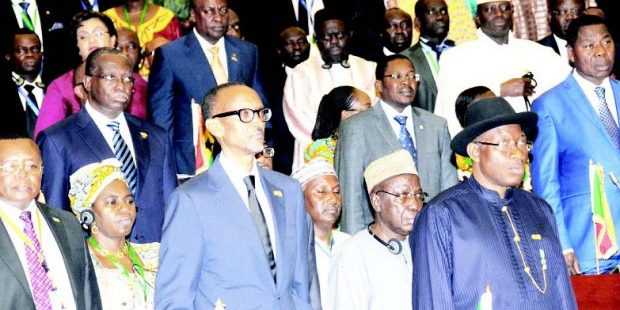 President Goodluck Jonathan yesterday returned to the country after cutting short his trip to the 23rd ordinary session of the African Union Heads of States and Government in Malabo, Equatorial Guinea.

Jonathan, who was due back in the country today, had to withdraw from the summit following the bomb attack at Emab Plaza located at Wise II, Abuja, in which 21 people were confirmed dead and 17 others sustained injuries.

Before he returned to the country yesterday, Vice-President Namadi Sambo had visited the scene of the bomb blast.

The Vice-President said that the Federal Government was determined to crush all acts of terrorism in the country.

He described the act as cowardly and unjust, saying that evil would not triumph over good.

“This cowardly, unjust act will be defeated – evil can never be sustained. Insha allah, this administration and Mr. President is not going to leave any stone unturned until we defeat these terrorists.

“Terrorism cannot survive in Nigeria or in any part of this country. We are doing everything; we are putting everything to ensure that within the shortest possible time this will become a better of the past,” Sambo said.

He assured that the government would ensure safety of lives and property of Nigerians.

Sambo also called on all Nigerians to be vigilant and observant in reporting any suspicious act, urging them to cooperate with the administration to overcome the security challenge.

Meanwhile, the Department of State Service, DSS, yesterday said it had prior information of an attack on a mall or market in Abuja and did everything within its power to avert it.

This was even as the service announced the arrest of the suspected sponsor of the 486 northerners who were arrested in Abia State last week.

DSS spokesperson Marylyn Ogar, said 144 out of 486 intercepted travellers to Abia State had been released while 342 were still under interrogation.

A wanted terror kingpin was said to have been arrested from the group.

According to Ogar, the suspected sponsor of the group was picked up in Bauchi State and is now being transferred to Abia State.

The DSS, however, called on Nigerians to be more conscious, explaining that security forces had made useful arrests and working to round up others.

Suspected terrorists had on Wednesday evening bombed the Emab/Banex Plaza in the high-brow Wuse II District of the territory, killing 21 and injuring at least 35.

The attackers were said to have rode on a motorcycle, a mode of transportation that has been banned in the area for nearly a decade.

Speaking at the scene of the blast yesterday, Ogar said the agency got intelligence report about a planned attack on a market and a busy shopping mall in Abuja two weeks ago.

“We went from one complex to another to create awareness and ask them to meticulously scrutinise visitors.

“Every day, our surveillance teams went out to those malls and markets to ensure compliance with our guidelines. They were here yesterday (Wednesday) till about 12:30pm when they left. It is worthy to note that without such guidelines in place, the casualty would have been higher because the suspects were actually denied entry,” she said.

Ogar added that two Turkish nationals were among those injured in the blast.

Force Public Relations Officer, Frank Mba, who also spoke to journalists at the scene yesterday, urged shopping malls and other public places to institute a stricter regime of access control.

“It was this level of access control here that even saved the situation,” he said.

He lamented the absence of closed circuit television cameras, CCTVs, in the plaza, saying they would have provided “strong evidential and investigative value” to detectives.

Mba said the death toll had not increased as at 4pm yesterday, adding that investigation was ongoing and the arrested suspects would be unveiled soon.