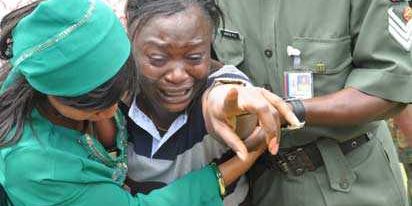 President Goodluck Jonathan declared, yesterday, that the Federal Government would not pay compensation to victims of Boko Haram’s atrocities.

He also said despite the progress made by the nation’s security services in their fight against the sect’s insurgency, his administration could not be said to have won the war against terror.

He spoke, yesterday, when the Presidential Committee on Dialogue and Peaceful Resolution of Security Challenges in the North submitted its report.

The committee was chaired by the Minister of Special Duties, Alhaji Taminu Turaki.

He expressed regret at the extreme violence of the group, especially against innocent civilian population, which had earned it a reputation as the most deadly terror group in the world.

President Jonathan expressed hope that the recommendations made by the committee in its report would help bring the excesses of the sect’s members to an end.

While ruling out compensation for victims of the violence orchestrated by the sect, the president however, said his government was favourably disposed to the suggestion by the committee to assist victims get back on track.

President Jonathan reinforced the recommendation of the committee that dialogue with the sect should continue, adding that force alone cannot resolve the insurgency in the north.

He rejected the call for payment of compensation for victims of the crisis.

The president commended members of the committee for accepting to serve, saying that “it’s not a ballroom dance because you were asked to meet the kind of characters you cannot predict their behaviour.

“It is quite risky and I believe that some of you, within this period, your immediate families believed that if they used to pray two times, they will be praying 10 times to make sure that God see you through.

“We are indeed very happy that within the period of this assignment, nothing quite untoward happened to any of you. We have to thank God for that.

“We have to thank you for concluding, though we can’t say that we have won the war.

“But listening to the address by the chairman, we believe that the document you have submitted will help us with the follow-up action.

“Finally, we will be able to bring the issue of the excesses of Boko Haram to a close. It is a challenging period for the country.”