President Jonathan Nigeria must be saved from evil people 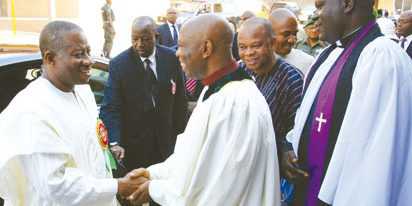 President Goodluck Jonathan, yesterday, stoked his campaign against perceived enemies of the country, saying that Nigeria “must be liberated from evil people”.

He also insisted that his administration was committed to combating the threat posed by the Boko Haram sect. The President noted that the Boko Haram menace was a temporary problem that will be defeated.

Speaking at the first Sunday church service of the year at the Church of Christ In Nations (COCIN) Abuja, President Jonathan said no person or group will be allowed to hold the nation to ransom.

According to him, the country must be liberated from “evil persons” in order to bequeath to generations unborn, a country that they would be proud of.

“Nobody or group can hold this country to ransom. We will collectively liberate this country from any evil person, so that we can leave behind a Nigeria that our children and grandchildren will be proud of”, he said.

Speaking on the Boko Haram insurgency, President Jonathan noted that “Boko Haram is temporary, Boko Haram will surely go. A number of countries are facing similar challenges and some have been able to overcome it and surely we will overcome Boko Haram. Life in the North must change; development must go to all parts of this country”.

“Let me reassure you again that myself and those who have been elected in this period, that the political environment is always noisy all over the world. There is nowhere you won’t hear so much noise. Even the United States of America, not long ago, the country was almost shut down. For so many months people were worried that the country that has practiced democracy for so many years could get to that situation. But that is politics for you.

“But let me reassure you that we will continue to work harder to improve the quality of lives of Nigerians. We are particularly committed to knowing where our challenges are, especially in some parts of the North. We are quite pleased with the measures from the outgoing President (of COCIN) and the measures of the incoming President concerning Boko Haram. We sympathize with those who have been affected by the executions.”

Delivering Pastoral greetings to the congregation, the new President of COCIN, Rev. Dachollom Datiri noted that the church has suffered greatly from Boko Haram attacks in its branches in the North East.
He, however, commended the President for declaring State of Emergency in the three northern states of Yobe, Borno and Adamawa, which he said has checked activities of the insurgents.

Datiri also commended the President for being able to ensure constant supply of petroleum products in the country in the past two years and the recently called off strike by the Academic Staff Union of Universities (ASUU) even as he hoped that 2014 will be strike-free.

“Your transformation agenda is loveable and commendable. You are always in church and God will never forget you. When a leader puts the things of God first, all other things shall be added unto him,” he said

Noting that the storms toward the 2015 election are man-made, he prayed that they will soon be over and that no evil plan will succeed in Nigeria.

“COCIN is ever thankful to God for giving you to Nigeria, COCIN members despite political affiliations will support you” he said.

In his sermon titled ‘Usefulness’, he said that no individual can claim to know the will of God without first being useful, fruitful or productive.

Taking the congregation through 2nd Timothy 2: 14-26; Ephesians 2: 10; 2nd Corinthians 9:8 and 2nd Timothy 3: 17, he said that there are some milestones to be scaled before a believer can be useful to God.