President Jonathan gets one-week ultimatum to declare for presidency 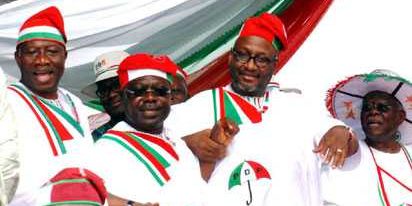 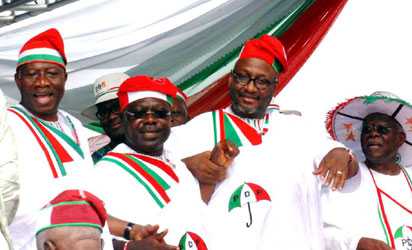 AHEAD of the formal declaration of President Goodluck Jonathan for his re-election bid for the 2015 Presidential election, the national leadership of the Peoples Democratic Party, PDP yesterday gave the President and other aspirants vying for various elective positions,  one week ultimatum to purchase their expression of interest and nomination forms, saying the

party cannot go for a national convention to ratify someone who has not indicated interest to contest.
Addressing journalists yesterday at the Party’s National Secretariat, PDP National Publicity Secretary, Chief Olisa Metuh said the October 30 closing date for the sale of expression of interest and nomination forms will not be extended beyond 6 pm on that date.
He said, “The NWC today (yesterday) decided that the issue of the closing date for the collection of the nomination forms cannot be extended. It will not be extended beyond 6 pm, of October 30th, no party member can obtain forms for our 2014 congress and convention after the deadline”.
Waiver for returning and new members
Despite the adoption of President Jonathan by the National Executive Committee, NEC at its 66th Meeting as the party’s sole candidate for the 2015 Presidential election waiting for ratification at the party’s National Convention slated for December 6, the national leadership of PDP said that the leadership of the party also yesterday granted waiver to all its returning and new members to enable them contest for the Ward and three Ad-hoc delegates ahead of the ward and Ad- hoc congresses, with a promise to release the full list of other members who are contesting for Governorship, National Assembly elections today.
Metuh, who spoke to journalists after the weekly meeting of the National Working Committee, NWC, said, “today, the National Working Committee has granted unconditional waivers to all returning and new members of the party who seek to participate in the Ward Delegate Primaries. Because it is an adhoc primaries, the NWC wishes to clarify that there is no requirement for party members to write to Ward Chairmen or Local government Chairmen for waivers. All party members, new, and returning members are free to participate in the Ward Delegate Congress.
No extension of sales
“The NWC today decided that the issue of the closing date for the collection of the nomination forms cannot be extended. It will not be extended, 6:pm, October 30, no party member can obtain forms for our 2014 congress and convention after the deadline, the last date is 30th of October and it will not be extended.
Party says no consensus at all levels
“The NWC wishes to inform all our party members that the conduct of the primaries and the convention will be open and transparent, we will not tolerate any attempt to influence or interfere in that process, nobody will be selected, nobody will be adopted, no consensus, it will be an open and transparent primary election  at all levels.
“Waiver has been granted to all those who want to be delegates, but for all those who want to be in the House  of Assembly, Senate, House of Representatives, Governorship, they will go through our process by applying for waivers. Today, the NWC has granted a lot of waivers, but because of the fact that more are going to apply tomorrow, we have not released it. After tomorrow, we will release the names of those who have been granted waiver to run or contest for the positions. “
“I want to state categorically that the NWC also informs Nigerians that the requirement for waiver does not apply to people who are board members occupying such committee positions.
“We are granting the waiver because we have noted that some chapters are planning to say that some people are either returning or they are new members and cannot contest to be delegates,  but the issue of three-man delegate is an Ad-hoc one because immediately after the convention, national or local government delegate, upon the end of the congress, the delegate ceases.
“The waivers that the NWC is dealing with is the ones for House of Assembly, the House of Representatives,  Senate and Governorship and Presidential. Those are the waivers that we are looking at not the issue of delegates.
The Constitution of the party stipulates that there will be a national convention where decisions or memos from the  National executives will either be approved or rejected  and there is no way that you can go to a presidential election and say you are adopting or electing someone who has not bought form.
Jonathan to pay N22m for form
“The October 30th for purchase of forms will not be extended and it is applicable to all candidates.”
It will be recalled that in the 39-page Election primary guidelines approved by NEC, President Jonathan, who is the sole candidate would pay a total of N 22 million to collect the Expression of Interest and nomination forms ahead of December 6 National Convention where he would formally emerge as the party’s candidate for the 2015 Presidential election
According to the document,  Expression of Interest Form Code PD002/P would go for N2 million which should be obtained from the PDP National Secretariat or such other places as may be designated by the National Executive Committee of the Party, just as the Nomination form Code PD003/P would be purchased for N20 million, totalling N22 million.