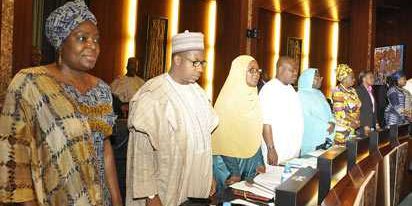 The sacked ministers did not have any inkling of their impending sack as some of them attended the weekly FEC meeting, yesterday.

President Jonathan reportedly thanked the sacked ministers for their services to the nation and wished them well in their future endeavours.

Minister of information, Mr. Labaran Maku, said the changes in the cabinet were due to the President’s commitment to deliver dividends of democracy to Nigerians by bringing in new hands and ideas into the system.

The minister said the changes had nothing to do with the current crisis in Peoples’ Democratic Party, PDP, adding that “cabinet changes over all the world was a normal thing in government.”

Minister of State for Education, Mr. Wike, will take charge of the ministry until the appointment of a substantive minister.

Maku is to supervise the Ministry of Defence, while the Minister of Power, Professor Chinedu Nebo, is to take full responsibilities of the Power Ministry pending when a Minister of State will be appointed.

Dr. Akinwumi Adesina, Minister of Agriculture and Rural Development has also been directed to take full charge of the Agriculture Ministry until a new Minister of State is appointed.

In an interview with reporters after the meeting, one of the affected ministers, Hajia Hadiza Mailafia (Environment) thanked President Jonathan for the opportunity provided for her and other sacked colleagues to serve the country.

She said for everything in life, there is a beginning and an end.

“Right when I was appointed, I knew for sure that I will leave one day. We are still in government and will continue to provide every necessary assistance when the need arises,” she said.

Former Minister of Education, Professor Ruqayyatu Rufa’i, was emotional while handing over to the Minister of State, Mr. Nyesom Wike.

She commended President Goodluck Jonathan for giving her the opportunity to serve the nation for the past three years and said she would return to Bayero University Kano, where she was a lecturer before her appointment.

She tasked the Minister of State to ensure that Nigerians have access to quality education.

She said: “I hope in the next few years all the challenges, which the education sector is facing would have been over. I am going back to the classroom, where I was before my appointment.”

Meanwhile, reacting to the cabinet reshuffle, constitutional lawyer, Professor Itse Sagay, said: “For me, it is a shocking development because nine is a very large number. I requested to know why and those who happen to know said the nine ministers were those nominated by the governors who have dispute with the president in PDP.

“My question is can you now transfer the bitterness and boil on innocent people? When did we start this my enemy’s friend is my enemy?

“The scale is too large for nine people to leave government for the wrong reason.”

The party, in a statement by its Publicity Secretary, Mr. Taofik Gani, said the President’s decision at this period must have been well thought out and progressive.

The list of sacked ministers showed that apart from the former Minister of Science and Technology, Professor Ewa, who was personally nominated by Jonathan in 2011, the rest were seen as lackeys of Obasanjo and PDP rebel governors currently fighting to stop Jonathan from seeking re-election in 2015.

Ewa, a nuclear physicist, who had known Jonathan for several years, was brought directly into the cabinet without the input of political stakeholders in Akwa Ibom State and is said to be almost apolitical.