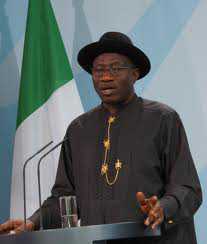 The undercurrents in the PDP ahead of the 2015 presidential race played out on a grand scale yesterday in Abeokuta with President Goodluck Jonathan, former President Olusegun Obasanjo and Governors Murtala Nyako (Adamawa State), Sule Lamido (Jigawa), Aliyu Wamako (Sokoto) and Rabiu Kwankwaso (Kano) as dramatis personae.

President Jonathan and the governors were on separate appointments with Obasanjo at his Hilltop residence but the state chief executives, who are not on the best of terms with the president, avoided contact with him all through their stay in Abeokuta.

All the four voted for Governor Rotimi Amaechi of Rivers State in the recent election of Chairman of the Nigeria Governors Forum (NGF), shunning Governor Jonah Jang of Plateau State who was President Jonathan’s candidate.

They followed up their support for Amaechi with a solidarity visit to Port Harcourt on Tuesday only to be pelted with stones on their arrival at the city’s airport by hoodlums.

Also on the Port Harcourt trip was Governor Babangida Aliyu of Niger State. Wamako was not on the trip to Port Harcourt.

The President reportedly refused to see Kwankwaso when the governor recently went to the Presidential Villa, Abuja.

President Jonathan was principally in Abeokuta to commiserate with his Special Adviser on Media and Publicity, Dr. Reuben Abati, on the death of his mother who was buried at the weekend and had used the opportunity to visit Obasanjo.

The former President has reduced his involvement in PDP affairs, and resigned as BoT chairman.

There are speculations that the relationship between him and the President is not as smooth as it used to be.

It was not clear why the governors went to see the former president, although one source said it might not be unconnected with the dispute over the chairmanship of the NGF.

The Chairman of the PDP Governors Forum, Chief Godswill Akpabio, had visited Obasanjo last week to seek his intervention in the matter.

The President and his entourage including Senator Grace Folashade Bent arrived Obasanjo’s residence at about 11:52am.

The gate was immediately shut against other visitors.

Security was beefed up outside and along the windy road leading to the compound.

The four PDP governors who were also scheduled to meet Obasanjo almost at the same time Jonathan arrived there were said to have diverted to an undisclosed location in the town apparently to avoid contact with Jonathan.

But some five minutes after the President’s departure from Obasanjo’s House at 1.28pm, the governors drove in a convoy in a manner that suggested they were playing a hide-and -seek game.

Emerging from the meeting with their host after about one hour, Nyako told reporters that they were in Abeokuta for “consultation” with the former president on “very important matters.”

“We have come to greet the most accomplished Nigerian ever and would remain so for a very long time and to consult him on very important matters,” he said, giving no details.

Sources said President Jonathan’s visit might not be unconnected with his ambition to seek re-election in 2015, the festering crisis in PDP and his sour relationship with the former Chairman of PDP’s BoT.

Apart from the NGF crisis which has pitched President Jonathan against some northern governors, the region has been clamouring for the return of power to that part of the country in 2015.

Governors Kwankwaso and Lamido are some of the northern political actors said to be interested in the race.

Lamido is said to be eyeing Amaechi as his running mate and observers say this is the main cause of the current face-off between Jonathan and the Rivers governor.

As a fallout of the crisis of confidence, Amaechi is currently locked in a battle for survival with many political forces in Abuja and Rivers who are bent on scuttling his career.

The State House of Assembly, for instance, is split into two factions with 27 members of the House rooting for him and the remaining five supporting the Minister of State for Education, Chief Nyesom Wike.

Wike, in turn, enjoys the backing of the Presidency.

From Obasanjo’s residence, President Jonathan and his entourage drove to Abati’s home at Asero, Abeokuta to console him on the death of his mother, Maria Taiwo.

Jonathan told reporters that it would have been out of order for him to go straight to Abati’s house without first seeing the former chairman of the Board of Trustees (BoT) of the PDP.

“Of course, you know that Reuben’s house and Obasanjo’s house are just about ten minutes drive from each other. It would not be proper if I’m coming to Ogun State to see Reuben who is just at Obasanjo’s backyard and I would not stop over to greet him (Obasanjo),” he said.

“Even the man (Obasanjo) himself would not be happy if we didn’t visit him. I am like a son to Obasanjo. People would think the president and Obasanjo probably have some differences. So, I said that before coming to greet the family, let us stop over and greet Obasanjo and we did that.

“We stopped over there. Even our helicopters are there in the Government House, we drove down here.”

He said he would have attended the Friday burial but for the fact that he had to go to Lome, Togo, on an official assignment.

He described Abati as a member of his larger family and the death of Madam Abati as one that touched everybody.

The President said: “Yesterday (Friday) when the main burial took place, I sent a team to represent me because I was in Lome. I would have been in the church service, but of course, as the head of state, you have some international programmes. There was nothing we could do.

“So, we were all there. Of course, political families and administrative set ups are just like the families we have in our homes. Reuben, being my media adviser, is a part of my larger family. And just like you have siblings here in this community, Reuben has siblings amongst my aides—my ADC, my chief of protocol and others. We all belong to the same family.

“So, if anything happens to any of us, it happens to all of us. And of course, we believe in our traditions, we are religious people. We love the way we live with our siblings and extended family. “The death of Madam Maria Taiwo Abati touches all of us and we must collectively play our role.

“Since we were unable to be here for the church programme, we said that this morning, we have to be here.

“We must come and greet our brothers and sisters to express our condolence and to encourage the family. Those of us who are Christians, the Bible says that we are supposed to live three scores and ten. So any number of years above that three scores and ten, is a blessing.

“So, for her to have lived to this ripe age, her departure should be celebrated and not mourned. So, our being here is to encourage them and to reassure the family that we are together and we’ll continue to be together.”