Presidency tells Five Northern Govs, you are agents of opposition 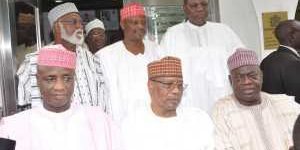 The presidency, yesterday, described the five northern governors, who carpeted Peoples Democratic Party over alleged poor leadership and internal crises, as agents of the opposition.

It warned them to desist from continuing to engage in acts capable of unduly heating up the polity and distracting President Goodluck Jonathan from delivering on his promises to Nigerians.

Political Adviser to the President, Alhaji Ahmed Gulak, made the allegation in an exclusive interview with Vanguard in Abuja.

He also said that Jonathan never signed any agreement with northern governors or traditional rulers, arguing that he (Gulak) would have been part of the process because of his position in the administration.

Gulak said that in the first place, it was not the duty of the five governors to constitute themselves into a group to go round the country consulting with former heads of state, since they were not commissioned by the party or the leader.

He said: “I can tell you that the five governors do not mean well for the party and the country. They are acting the script of some elements bent on distracting Mr. President and causing confusion where none exist.

“A discernible pattern from what the five governors are doing is that their grandstanding is not about a genuine concern to put things right in the country as they claim, but how to bring down President Jonathan so that one of them can step in.

“What I can assure them is that they are bound to fail woefully because Nigerians know that they don’t have any genuine concern for the country.”

Gulak, who stated that Jonathan was not worried about their antics, said that the President was only unhappy over the decision of the five governors to raise false alarm about the party and its leadership.

He particularly had harsh words for Governor Murtala Nyako of Adamawa and his Sokoto State counterpart, Aliyu Wamakko, who was suspended last month and recalled a week after. Gulak described them as ingrates.

Gulak said it was painful to the leadership of PDP for the duo of Nyako and Wamakko not to show a debt of gratitude to the party.

He said the party welcomed them with open arms from All Nigeria’s Peoples Party, ANPP, thereby paving the way for them to win elections in their respective states.

He said that despite the forces working against the party, PDP was still solid, predicting that the party would win the next election without any hassle.