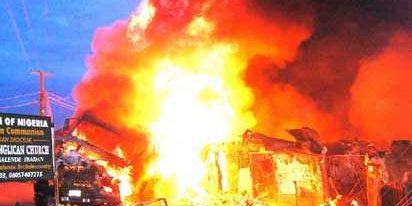 Pregnant woman, Ekaiquo Ewa, and her two children aged 7 and 3, were burnt to death, when a building that served as a residential building and business outlet caught fire, weekend, in Ugep, Yakuur Local Government Area, Cross River State.

The inferno, which engulfed the 27, Calabar Road house on Friday at 7p.m., caught the woman and her children in their one-room apartment, while her husband, Denis Ewa, was away from the house.

Okoi, a mechanic, whose shop is close to the burnt house, told Vanguard: “We did not know the source of the fire. It is still a mystery how the fire started and spread so fast that the woman and the two children could not escape.”

The woman, Okoi said, was from Akwa Ibom State, while her husband is from Abini, a neighbouring village to Ugep.

He said: “They have been living here for some time and the time the fire engulfed the house, Denis was not at home and effort by other tenants to stop the fire did not yield fruit as the flame was too fierce.”

The fire completely razed several motor parts and provision shops, which were in the front of the building.

“The fire started suddenly and was so fierce that nobody could salvage anything,” Okoi said.

The body of the woman had been deposited at the Ugep General Hospital Mortuary, while those of the children had been buried.