Poulter in touch at Sawgrass 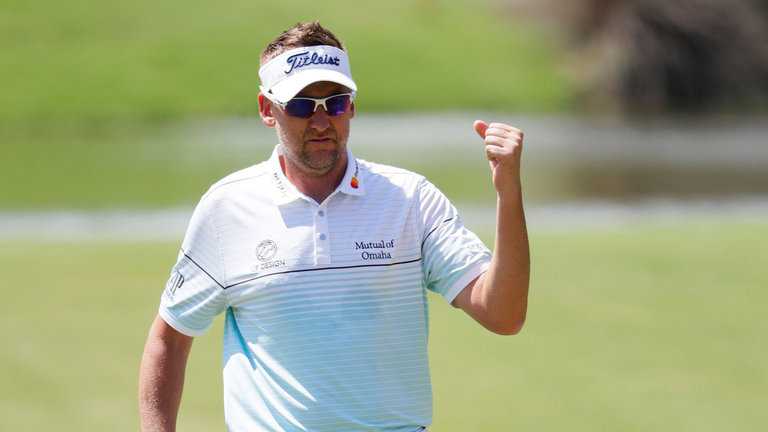 Ian Poulter is just three shots off the lead heading into the final round of The Players Championship as Sergio Garcia stormed into contention on day three at TPC Sawgrass.

JB Holmes (70) and Kyle Stanley (72) will go into the final round tied for the lead on nine under par, one clear of Louis Oosthuizen, after Garcia defied the blustery conditions that hampered the field in the middle part of the day as he fired a superb 67 to get to five under.

Poulter battled hard to keep a bogey off his card and ground out a commendable 71 to get within three of the lead along with Emiliano Grillo, who made seven birdies in his 67, while Si Woo Kim is well placed on seven under after a 68 despite a big mistake at the 16th – his only blemish of the day.

Rory McIlroy looks too far behind to contend after a second consecutive 71 left him at one under, alongside defending champion Jason Day, while former winners Rickie Fowler and Henrik Stenson both finished poorly to slip to level par.

After Pat Perez showed the field a low score could be had after he posted a best-of-the-day 66, Garcia made a significant move up the leaderboard after a sparkling run on the back nine, reeling off three straight birdies from the 11th and then holing an eagle putt from the fringe at the long 16th.

The Masters champion, who was four over par after six holes on the first day, did falter at the last as he three-putted from close range, but his 67 propelled him 27 places up the leaderboard and right in the mix for a second Players title.

Poulter had surged through the field late on the second day as he posted a 67 in the final group of the day, and he was content to grind it out in the tricky conditions and hand in a “boring” scorecard containing one birdie and 17 pars.

His lone birdie came early at the second as he pitched to tap-in range, and he missed a few further good chances – most notably at the 10th after knocking his approach inside five feet – while he also did well to salvage some clutch pars and keep a bogey off his card.

Poulter ended the day three off the pace as Holmes rode his luck and came close to an ace at 17, where he settled for a third birdie on the back nine after parring the first 10 holes.

Holmes was soon joined at nine under by Stanley, who endured a rocky start with three bogeys over the first four holes before recovering to pick up shots at the eighth and 17th, where he knocked a sublime tee shot to within three feet of the pin.

Overnight joint leader Oosthuizen also began his round with a bogey, and the South African was inconsistent all day as he dropped three further shots while making two birdies in an erratic 74.

Alex Noren, a four-time winner on the European Tour last season, bogeyed the last for a 72 and the Swede will go into the final round alongside Garcia on five under, while Francesco Molinari (69) and Garcia’s compatriot Rafa Cabrera Bello (73) are a further shot adrift.

McIlroy insisted his back felt a little better as he lifted himself into a tie for 20th, making good birdies at the 16th and 17th before giving one back after taking three putts to get down from over 50 feet at the last.

Stenson bogeyed two of the last four holes to slip to level par alongside Fowler, who was three under for the day and the tournament until his ball lodged in a tree at the last and he then pulled his approach into water as he signed off with a frustrating triple-bogey seven.

And world No 1 Dustin Johnson was another big name to struggle down the stretch as he dropped five shots in as many holes, including a visit to water at 16, as he returned a 74 to finish on two over par.