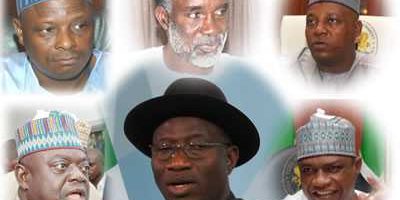 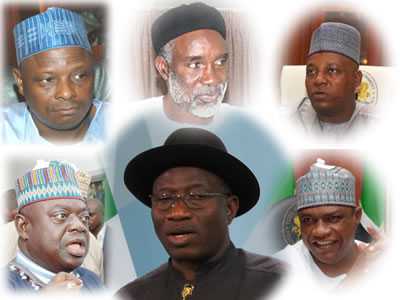 The North has asked President Goodluck Jonathan to explain who he was waiting for before taking action to bring officials of the former President Olusegun Obasanjo administration to book over political killings which he (Jonathan) said were the order of the day when Obasanjo held sway as the head of government in the country.It also insisted that the next president of Nigeria, must emerge from the area, pointing out that President Jonathan must stand down  for  their own in 2015.The northern groups, Arewa Consultative Forum, ACF, and the Northern Elders Forum, NEF, made these known at two separate  interviews with Saturday Vanguard yesterday.Reacting to a letter from Obasanjo, alleging that the President had placed 1000 people on watch list, Jonathan had in turn placed political killings in the country on the door steps of the former President.Obasanjo-Jonathan3Jonathan replied Obasanjo’s  18-page open letter dated 2, 2013, to him, pointing out that all the political killings since the Fourth Republic began, took place at the time Obasanjo was President.According to Jonathan, although political killings had occurred in the country, none of them had taken place since he became President about three years ago.Among those who were said to have been politically murdered during Obasanjo’s administration included, the former Minister of Justice and Attorney-General of the Federation, Chief Bola Ige, and  South-South politicians, Chief Harry Marshall, Chief A.K. Dikibo, a former Senatorial Candidate of the defunct All Nigeria People’s Party, ANPP, in Imo State, Uche Orji, Arc Layi Balogun, former Vice Chancellor of the University of Nigeria Nsukka, UNN, Prof Chimere Ikoku, former Chairman of the Nigeria Bar Association, NBA, in Anambra State, Chief Barnabas Igwe and his wife, Chief Victor Nwankwo of Fourth Dimension Publishers and Chief Funso Williams.However, the Secretary General of NEF, Prof Ango Abdullahi, confirmed in an interview with Saturday Vanguard that the North had made its position on the 2015 presidency known to President Jonathan’s emissaries, who had attempted to recruit some of their key stakeholders for the next poll.In the letter to Obasanjo dated December 20, 2013, Jonathan further stated, ‘’There have certainly been cases of political assassination since the advent of our Fourth Republic, but as you well know, none of them occurred under my leadership.’’Regarding the over 1000 people you say are on a political watch list, I urge you to kindly tell Nigerians who they are and what agencies of government are “watching” them. Your allegation that I am using security operatives to harass people is also baseless. Nigerians are waiting for your evidence of proof. That was an accusation made against previous administrations, including yours, but it is certainly not my style and will never be. Again, if you insist on the spurious claim that some of your relatives and friends are being harassed, I urge you to name them and tell Nigerians what agencies of my administration are harassing them.’’I also find it difficult to believe that you will accuse me of assisting murderers, or assigning a presidential delegation to welcome a murderer. This is a most unconscionable and untrue allegation. It is incumbent on me to remind you that I am fully conscious of the dictates of my responsibilities to God and our dear nation. It is my hope that devious elements will not take advantage of your baseless allegation to engage in brazen and wanton assassination of high profile

politicians as before, hiding under the alibi your “open letter” has provided for them.’’However, reacting to President Jonathan’s allegation on political killings before he came into office, the National Publicity Secretary of ACF, Mr Anthony Sani, said, ‘’If you consider the submissions by Mr President,whose place in the order of things, is to provide order and direction to the nation… I wonder if he needs ACF to ask him to take necessary actions that are within his mandate.’’I have made it clear that what the former president wrote to his place-holder, President Jonathan, except perhaps the issues of training and arming snipers against political opponents-was common place knowledge. The same with the issues raised by President Jonathan.Meanwhile, Prof Abdullahi who spoke in an interview with Saturday Vanguard noted that the North had already made its position on the 2015 presidency known to President Jonathan’s emissaries, pointing out that a list of 151 key northern politicians and leaders was drawn by presidential political tacticians with a view to wooing them to work for the president in the next general elections.The former ABU Vice Chancellor and Presidential Adviser on Food Security admitted to Olusegun Obasanjo, said that he and some other northern leaders, whose names appeared on the list, had already been contacted for possible support to Jonathan ahead of the impending election.He said however that the presidential team must have hit the rock, as most of the northern elements consulted on the need to work for Jonathan’s re-election, politely turned down the offer.Abdullahi did not mention the name of any of those who contacted them and who politely rejected the offer to work for the president.His words, “What I can tell you now is that my name is on the list of the 151 Northern leaders and politicians, who have been earmarked for consultation by those working for Jonathan. But the good thing is that most of those contacted have also politely turned down the offer.“What Nigerians should know is that the North as it is today, is ready to receive and welcome a Nigerian president from any of the 19 northern states come 2015. He can come from any of those states and we are ready to support and work with such a leader come 2015.“I have been contacted by those who believe they can lure me and other Northern leaders to change our cause and we courageously but politely made our political position regarding 2015 very clear to them.“They must have got our message and have decided to adopt other strategies, which in any case, would not change our position regarding the emergence of the Nigerian president in 2015.”Although President Jonathan is yet to declare his intention to run in the 2015 poll, his body language suggests he would run, hence, opposition has been mounting against his second term particularly from the North, which claims that he signed a deal to run for only a term of four years after completing the remaining two years of late President Umaru Yar’Adua.The lingering disagreement among some of the party leaders and governors in the ruling Peoples Democratic Party, PDP, over 2015, led to the defection of five PDP governors to the opposition All Progressive Congress, APC, last month.President Jonathan has repeatedly said that it is too early in the life of the administration to begin campaign for re-election in 2015, pointing out that it was better for him to concentrate on the provision of  social amenities for Nigerians than dissipate energy on an election that was still far away.