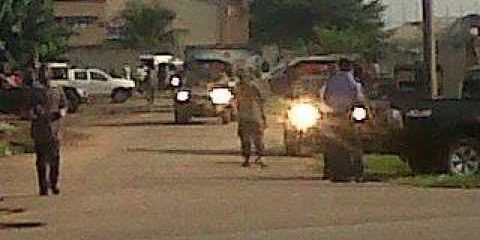 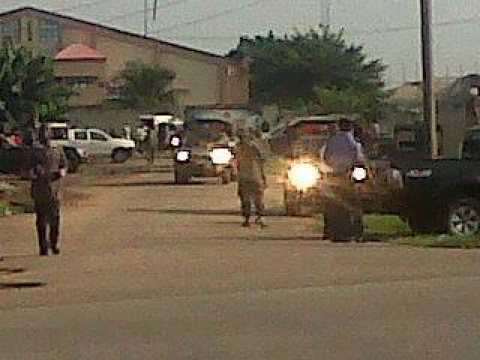 THE police, yesterday, averted what could have amounted to the worst disaster in the southern part

of the country by terrorists, as it defused three improvised explosive devices, IEDs, carefully planted in the Living Faith Church, (Winners Chapel), Owerri that accommodates more than 10,000 worshippers.

Imo State Governor, Chief Rochas Okorocha, in his reaction, said “the bombs had the capacity to cover about 500 metres and could have been a huge disaster if they had exploded as planned by the terrorists”.

Following the report that the police had uncovered and defused the explosives, palpable tension and confusion enveloped Owerri, Imo State capital as residents were apprehensive that members of the dreaded Islamic sect, Boko Haram, must have been responsible for it.

Already, all the security chiefs operating in the state, have visited the church premises, located off Port Harcourt Road, Owerri, to have a first hand assessment of the planned bomb attack.

Addressing newsmen shortly after inspecting the area, the Commissioner of Police, CP, Mr. Abdulmajid Ali, confirmed that six persons have been arrested in connection with the planned bomb attack

The CP explained that soon after getting information about the strange objects, the anti-bomb unit of the Command was immediately despatched to the scene.

According to Ali, “the police have disabled the devices, while serious investigations have commenced to uncover those behind the plot”.

He appealed to residents of the state not to panic but to be more security conscious, especially as the foiled attempt ought to be an eye opener to all.

“We are worried about the development but people should be vigilant. People should be very curious about anything they see within their surroundings. People should however not pick up anything. They should contact the security agencies any time they see strange objects”, the CP cautioned.

The police boss pleaded with the citizenry to be conscious of what is happening in their surroundings, adding that people must learn to see any strange fellow with suspicious movement as a suspect.

Although the pastor in charge of the church, Moses Oyedele, declined to speak to journalists on the matter, a member of the security group in the church, Pastor Chike Odenigbo, said it was one of his colleagues who noticed the two explosives planted at the gate and another at the church auditorium, which he said accommodates more than 10,000 worshippers at a time, that alerted them of the suspicious devices.

“The founder of the church had said it about three weeks ago that we should not allow any vehicle to come into the church premises. So, we started the stop and search process last week. We are expecting that God will continue to work for us”,Odenigbo said.

At press time, the police had cordoned off the area, thereby restricting both human and vehicular movement, while worshippers were diverted to the Heroes Square along Concorde Avenue, Owerri.

When Vanguard visited St. Mulumba’s Parish, Owerri, the Parish Priest, Rev. Fr. George Ahamefula, confirmed receiving the security alert pointing out that “serious measures have been put in place to forestall any attack from the dreaded sect”.

It would have been huge disaster — Okorocha

Governor Rochas Okorocha, in his reaction said the improvised explosive devices planted in the church, would have been a huge disaster if they had exploded as planned by the criminals.

Okorocha, who stated this, while speaking to journalists, yesterday, in Government House, Owerri, equally disclosed that the bombs had the capacity of covering about 500 metres range.

“It is true that bombs were planted in Winners Chapel, today (yesterday). These bombs had the capacity to cover about 500 metres range and would have been a huge disaster if they had exploded as planned by the insurgents”, Okorocha said.

What was also worrisome to the Governor was that the church is located in a densely populated area of the municipality. He thanked God for saving the lives of innocent citizens.

Answering a question, Okorocha affirmed that some suspects have already been arrested in connection with the crime and commended the security agencies for being alive to their duties.

While assuring the citizenry that “the state has applied necessary measures to stop further occurrence of the ugly situation”, the Governor added that there would be an emergency security meeting at the
International Convention Centre, Owerri, where further security briefing would be made available to Imolites.

“The situation is under control. Imo State is not known for such ugly incidence. I, therefore, appeal to all Imolites and other Nigerians resident in the state, to be more security conscious and alert the police about any suspected objects, vehicles or persons around their vicinity”, Okorocha pleaded.

Reacting to the development, the Commissioner for Information and Strategy, Dr. Theodore Ekechi, said although government was visibly worried about the ugly development, it would allow the security agencies to do their job.

“No responsible government and no responsible people would be happy when reports of things like this begin to challenge the tranquility and serenity of a state like Imo”, Ekechi said.

Meanwhile, security has been beefed up in the state, following the foiled attempt to bomb the church in Owerri.

Vanguard recalls that the Owerri residence of former Governor Ikedi Ohakim which was gutted by fire on May 15, was suspected to have emanated from an incendiary bomb thrown into the building.

The Imo State Police Command has also warned members of the public, especially churches, schools, markets and motor parks in the state, to be more vigilant and security conscious about their surroundings.

A statement by the Police Public Relations Officer, PPRO, Mr. Andrew Enwerem,said any strange objects observed in the form of refrigerator or air condition compressor, either hidden in sacks or otherwise, should be reported to the police immediately.

The statement advised members of the public to go about their lawful business without panic, as the Command is determined to ensure the safety of life and property of the residents in the state.
Shettima’s warning

Borno State Governor Kashim Shettima had last week warned that Boko Haram had the capacity to extend havoc across the country, if they succeeded in overrunning the North-East. He said: “If Boko Haram succeeds in overrunning the North East as they seek, they will surely want to extend greater havoc to other parts of the North and if they overrun the North, they would want to extend to the South. Crisis of any type has got a life of its own which depends on something for survival.”