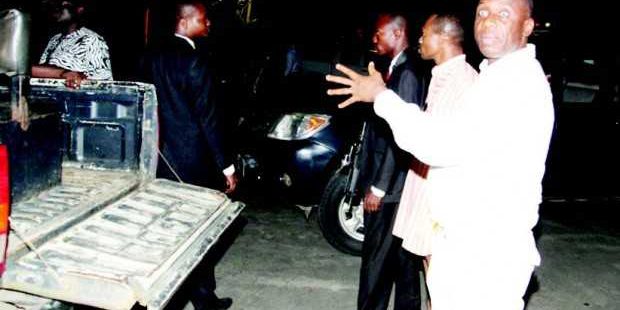 The Rivers State Governor, Mr. Rotimi Amaechi was yesterday allegedly prevented from entering the Government House through a preferred route by men of the state Police Command.

Amaechi’s convoy, according to the Chief Press Secretary to the governor, Mr. David Iyofor, was stopped just a few metres to the Government House while he was on his way back from an inspection tour.

“We were coming from an inspection tour with some visitors, while on our way through the avenues, via the Polo Club Road, we came upon some fully armed policemen in about five vehicles blocking the road.

“Some of the governor’s aides quickly alighted and informed the policemen that the convoy was that of the governor. They refused to allow us passage and the governor himself had to come down to address them, but all entreaties fell on deaf ears and after about 45 minutes, we had to allow reason to prevail.

“We later took another route that clearly took us out of our area, because we had to take a roundabout route, it took us away from our desired route, which is only a stone throw away from the spot. They saw the governor, but they still deliberately prevented us from taking the road,” he alleged.

However, the state Police Public Relations Officer, Angela Agabe, a Deputy Superintendent of Police told National Mirror, that there was no way the policeman on duty at the spot could have deliberately blocked the governor from accessing the Government House.

Agabe said the policemen, who were actually in front of the GRA Police Station, were there to prevent the breakdown of law and order as they had been drafted to the area earlier to prevent some people from causing public disorder when they attempted to perform the opening ceremony of the office of a parallel faction of the PDP. “It is not true that the police prevented the governor from accessing the road.

What happened was that the police had dispersed some people, who had earlier tried to open the offices of a parallel PDP in front of the GRA Police Station. There is no way they could have deliberately prevented the governor from passing the road. It must have been a misunderstanding.

If the policemen had known that the governor was in the convoy, he would have been allowed easy passage,” Agabe said. Earlier in the day, tensions rose in Port Harcourt, as men of the state police command stormed the New PDP office, 10 minutes after it was opened.

Members of the Abubakar Baraje faction of the party had opened its secretariat in the state capital around 1p.m. only for it to be sealed by the police 10 minutes later. The new party secretariat, located on 38, Forces Avenue, Port Harcourt, was the same building used as the campaign office of Governor Rotimi Amaechi during his second term bid in the 2007 general election.

The Chief of Staff, Rivers State Government House, Mr. Tony Okocha, who led party supporters, told journalists at the brief but colourful ceremony that some politicians in the state were opening the office on the behest of the national leadership of the new party.

“In strict obedience to the directive of the national leadership of the New PDP, I hereby open the office of the Rivers State chapter. As I open this new secretariat of our great party, the PDP, I hope that this will usher in fresh air and democratic renewal in our state and nation.”

He added that the New PDP was a response to the “impunity, recklessness and dictatorial tendencies associated with the Alhaji Bamanga Tukur-led PDP.”

“The new PDP is a national response to the impunity, recklessness and dictatorial tendencies typical of the former leadership of our party. “I, therefore, urge the party executive in the state to immediately commence the mobilisation of party men and women to deliver the party from the stranglehold of tyrants,” Okocha said.

He commended the governors of Kano, Jigawa, Sokoto, Adamawa, Kwara, Niger and Rivers as well as other adherents for their courage.

“They are indeed heroes of democracy,” he said. But just moments after the flags were hoisted, a team of policemen led by the Deputy Commissioner of Police, Mr. Sam Okaula, raced to the scene and pulled down the flags.

the argument that ensued between the security operatives and the politicians present, the six flagpoles on which the party and national flags were hoisted were pulled down and dragged across the street into the premises of the divisional police headquarters.

After sealing up the office, the policemen ordered party officials and journalists out of the area, but the newsmen resisted. In the process, a camera belonging to a photographer, Mr. Obed of The Sun was smashed by a policeman. Some other journalists were also assaulted and sustained various degrees of injuries.

Okaula said he ordered the closure of the New PDP office to forestall illegality, adding that there was no parallel PDP secretariat in the state. “What we have done here is to stop any illegality.

We will not allow anybody to take the laws into his hands. We will go all out to ensure that we maintain law and order in this state. Anybody that takes the law into his hands will be dealt with accordingly.

“There is no secretariat here and anybody who comes here to hoist any flag here will be dealt with. That is what we have done and nothing more than that.”