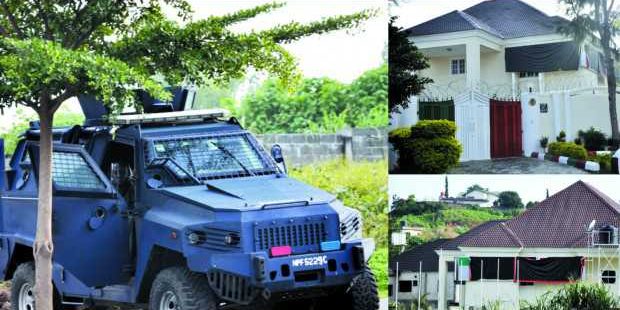 The PDP leadership crisis claimed its first casualty yesterday: the proposed secretariat of the Abubakar Baraje faction was sealed off by armed policemen.

The security agents brandished an order of the Federal High Court, Abuja, obtained on Friday, the same day elders of the party including ex-President Olusegun Obasanjo, ex-military ruler, General Ibrahim Babangida, the Chairman of the PDP Board of Trustees (BoT), Chief Tony Anenih and two former national chairmen of the party-Chief Barnabas Gemade and Dr.Ahmadu Ali, met with the two factions in the dispute in Abuja to set the tone for the resolution of the crisis.

The Baraje faction which was still savouring the court’s refusal to grant the request of the Tukur group to restrain it from parading itself as the representatives of the party denounced the seal off of its secretariat as the height of impunity.

It said it was designed to break the spirit of its members,but vowed that the plan would fail.

The Tukur faction however said the police action was in order.

The two factions are interpreting the court order differently.

Justice Elvis Chukwu had ordered the two parties to maintain the status quo and fixed September 12 for the hearing of the motion on notice.

Although,the plaintiffs including Tukur,PDP,Prince Uche Secundus (Dep. National Chairman) and Dr.Charles Akintoye (Act.Nat Secretary),had prayed the court in their Motion Exparte for an order restraining Alhaji Atiku Abubakar and other defendants, their associates, subordinates, workers and agents from “parading or holding out themselves as the national officers of People Democratic Party, and also from opening and/or operating parallel national, state. LGA and ward secretariats of PDP” pending the determination of the substantive motion,the court was silent on it in its ruling.

But it specifically asked both sides to “maintain the status quo ante bellum pending the hearing and determination of this suit.”

While the Tukur faction interpreted the status quo to mean that it is the authentic PDP leadership, the Baraje faction insisted that the ruling recognised the formation of New PDP.

Investigation revealed that the Tukur faction, which also celebrated the ruling on Friday, had notified the police of the order of the court.

A source in Tukur’s camp said: “If you know the meaning of status quo ante bellum, you will appreciate why we are celebrating. The court said we should revert to pre-factionalisation period.

“The police have no choice than to respect the order of the court irrespective of whose ox is gored. Baraje and his ilks should go back to the court for the interpretation of any ambiguity.”

Responding to a question, the source said: “It is true the court rejected the application to restrain Baraje and others from parading themselves as NWC members of PDP but the same court was specific on status quo ante bellum.”

It was gathered that the seal off of the Baraje faction’s secretariat located at 4 Oyi River Crescent, Off Ibrahim Babangida Boulevard was aimed at preventing its formal opening tomorrow.

The choice building is about 100 metres from the Boulevard.

When our correspondent visited the secretariat at about 5.19pm, its gate had been coated in PDP colours. A signpost on the wall of the building was covered with a black veil and the road leading to the secretariat filled with white granite.

It was gathered that the policemen who sealed off the secretariat were drafted from the FCT command, especially Maitama Police Station.

Besides blocking the access road with a weather-beaten Armoured Personnel Carrier, policemen and plain- clothed security men sat under a tent, which is about 50 metres from the building.

A highly-placed source said: “Security agencies got a report that the G-7 governors and other leaders of Baraje faction have concluded plans to open the secretariat with pomp and pageantry on Monday.

“As a matter of fact, Baraje, the G-7 governors and others went to inspect the secretariat after leaving the venue of the peace talks on Friday.

“Many PDP stalwarts and members have been mobilised for the inauguration of the secretariat.”

A resident of the Panama neighbourhood said: “We were all shocked, we woke up to see armed policemen cordoning off the secretariat.

“We just hope that we are safe here. We do not want them to use the excuse of factionalisation to deny us peace in this neighbourhood.”

The Baraje group yesterday said the office seal- off was the height of impunity.

Its National Secretary, Prince Olagunsoye Oyinlola, said the security forces who effected the seal off were mobilised based on a non-existent court injunction .

Oyinlola said: “The whole world knows that Justice E. Chukwu of the Federal High Court, Abuja on Friday refused to grant Alhaji Bamanga Tukur’s application for an ex parte injunction against our party’s executive. The Judge asked parties to maintain the status quo.

“His judgement was a reinforcement of an earlier order of the Lagos High Court which also asked parties to maintain the status quo.

“Now, should Nigerians conclude that Tukur’s interpretation of status quo is this crude display of naked power and undisguised impunity?

“We are not at all surprised at this occurrence given the fact that Tukur issued a statement on Friday evening deliberately seeking to mislead the media and the public that Justice Chukwu granted him an injunction against us.

“ We are happy that the ever vigilant Nigerian press ignored him and his falsehood. Now, he is not only wilfully disobeying the various courts which have made pronouncements on this matter, he is spicing up his love for impunity with this reckless misuse of state power by misleading the police.”

The faction asked Police Inspector- General Mohammed Abubakar to withdraw his men from the building in the interest of justice, rule of law and democracy.

Nigeria,according to Oyinlola, is ruled by law and not by might and force.

He declared that the faction would not allow the move to break ‘our spirit’ and that the group “are determined to rescue our party from the lawlessness and crass arrogance that have defined the character of the Tukur leadership since inception. Our party needs that deliverance, its members deserve the change we have brought into it.”

He wondered why Tukur, who appeared before the party’s elders on Friday “ostensibly in search of peace, could, in less than 12 hours later, start another round of acts of impunity.”

The National Publicity Secretary of the Tukur faction,Chief Olisa Metuh, yesterday offered explanation for the seal off of the Baraje faction’s secretariat, saying that the security agents acted in accordance with a court order.

But he said the move will not affect the on-going reconciliation by party elders.

Metuh, who spoke with reporters in Lagos, said: “There is no problem with the seal off of the PDP faction’s office. There is no problem, if the police sealed off the their secretariat.There was a court order to that effect. A federal High Court judge, Justice E.S. Chukwu, said the status quo should be maintained. The police acted on the order of the court.”

He acknowledged that the party has challenges but said the logjam would soon be over.

He accused the media of always focusing on the weakness of the ruling party instead of highlighting its strengths, successes and prospects.

He also said the governors in the Baraje faction have not shown enough commitment and loyalty to the party leadership.

He said their demand for the resignation of the national chairman, Alhaji Bamanga Tukur, was improper, impracticable and unfair, pointing out that the removal of the party chairman is laid out in the PDP constitution.

Metuh also objected to the insinuation that the perceived second term ambition of President Goodluck Jonathan was responsible for the crisis, explaining that the President’s fate lies with the PDP constitution, the 1999 and court.

He said:” It is undemocratic to prevent somebody from pursuing a second term ambition, unless the constitution or the court says otherwise. It is within the right of the President to contest. It is unfair to hinge the peace move on his second term ambition.

“By the order of the court, no person is authorised by law to open a secretariat or operate under the name, colour and flag of the PDP other than the one led by Alhaji Bamanaga Tukur.

“The sealing off of the secretariat opened by the Baraje group under the name, colour and flag of the PDP is therefore in order and in line with the law,” Metuh added.

Also speaking on the PDP crisis yesterday, aviation minister in the Obasanjo government, Chief Femi Fani-Kayode said that “the only hope left for the PDP is if President Goodluck Jonathan listens to President Olusegun Obasanjo and those behind him and drops his 2015 ambition.”

Fani-Kayode in a statement added: “The truth is that Obasanjo is one of the greatest political strategists that Nigeria has ever known and he is an extremely dangerous adversary. I know him well and his ways are deep.

“ Go and find out what happened to all those that betrayed him or tried to kill him. Their end is never good. Those close to Jonathan would do well to advise him to get on his knees and beg his political mentor. Only Obasanjo, with the help and support of President Ibrahim Babangida and Vice President Abubakar Atiku, has the power, authority and moral gravitas within the PDP to call the dissidents to order and rally their support. Without that, President Goodluck Jonathan is finished and he should just wave goodbye to his 2015 re-election ambitions.

“The APC, with the support of the PDP dissidents, will form the next Federal Government of Nigeria. That is the way to go. PDP, as we once knew her, has gone forever. The ship has hit the rocks and she has sunk to the bottom of the sea. She is dead and buried and my prayer is that her soul rests in perfect peace’’