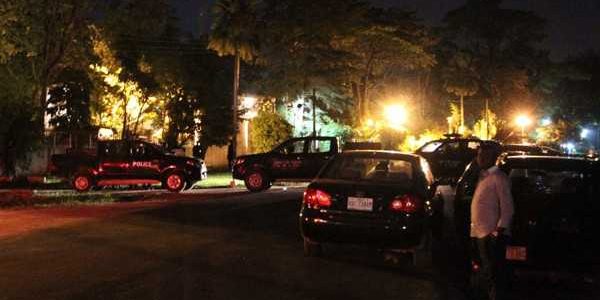 The Police yesterday sealed off the secretariat of the New Peoples Democratic Party (PDP) in Port Harcourt, the Rivers State capital, shortly after its inauguration.

The Chief of Staff to Governor Chibuike Amaechi, Chief Tony Okocha, inaugurated the secretariat and hoisted the party’s flags. He was supported by top Rivers government officials and politicians.

Amaechi is one of the seven PDP governors who formed the Kawu Baraje-led New PDP on August 31.

The secretariat, directly opposite the old GRA Police Station, was the headquarters of Amaechi Campaign Organisation in 2011.

The policemen who sealed off the secretariat were led by Deputy Commissioner of Police in charge of the Criminal Investigations Department (DC, CID), Sam Oghaora. They pulled down the six poles flying the PDP’s flags and two national flags. Party members in the expansive premises were chased out and the secretariat sealed off.

No fewer than 16 police patrol vans were in front of the sealed secretariat as at press time. Two of the vehicles were used to barricade the main entrance. The policemen did not allow access to the premises.

Amaechi, who has been at loggerheads with the Commissioner of Police, Mr. Mbu Joseph Mbu, described the police action as “barbaric”, saying it will be challenged in court.

Amaechi spoke on the telephone through Okocha. He described Mbu as a politician, saying he took sides in the political crisis.

Mbu said leaders of the new PDP did not clear with him before inaugurating the party’s secretariat.

Amaechi said: “The action of the police is very barbaric. The police in Rivers State are now partisan. Mbu said we should have first cleared with him, before hoisting the party’s flags and inaugurating the secretariat.

“How could we have gone to clear with Rivers Commissioner of Police, when we were not protesting? Nonetheless, we have achieved our aim, which is opening of the secretariat.

“Mbu’s policemen came shortly after the inauguration, pulled down the poles with PDP’s and national flags and sealed off the secretariat.

“We will not take the law into our own hands. We are not going to fight them. We will go to court.

“The responsibility of Mbu’s policemen in Rivers State is no longer the protection of lives and property. The commissioner of police is now a politician. We will not allow the impunity.”

“We do not have any secretariat here and anybody who has come here to hoist any flag will be dealt with. That is what we have done and nothing more than that.”

While the policemen were ordering politicians and journalists out of the secretariat, some of the overzealous security personnel attacked some reporters and broke the camera of The Sun’s photojournalist, Obed Mpiegbula.

Inaugurating the secretariat, Okocha said: “In strict obedience to the directive of the national leadership of the new PDP, I hereby open the office of the Rivers State chapter.

“As I open this new secretariat of our great party, the PDP, I hope that this will usher in fresh air and democratic renewal in our state and nation.

“The new PDP is a national response to the impunity, recklessness and dictatorial tendencies typical of the former leadership of our party.

“I, therefore, urge the party executive in the state to immediately commence the mobilisation of party men and women to deliver the party from the stranglehold of tyrants.

“On Abubakar Kawu-Baraje led national Leadership of the PDP we stand.”

The state’s chairman of the PDP, Chief Felix Obuah, described the inauguration of the secretariat as “provocative”, an “affront”, to cause chaos and breakdown of law and order.

Obuah, who spoke in Port Harcourt, said it would be criminal to open another PDP secretariat, besides the one used by the party led by Alhaji Bamanga Tukur.

Obuah said: “We warn that any such move not only amounts to an outright disregard for the rule of law, but is also aimed at truncating the nation’s democracy.

“There is a subsisting Federal High Court order, barring any attempt to impersonate and, or float any other political party in the name of the PDP, which must not be abused, as a law-abiding party.

“It is imperative, in the light of the apparent danger this criminal plan portends, to alert the security operatives in the state to be aware.

“This is another in the series of plots to create disharmony in the state, so as to have enough reasons to accuse the law enforcement agencies of reneging on their responsibility to ensure safety of lives and property in the state. We will not let this be.

“There is need to sensitise the entire Rivers people to be alert to such plot. Governor Amaechi strategically chose to hatch the plot same time and day President Goodluck Jonathan made a stopover in Port Harcourt, enroute Yenagoa, the Bayelsa State capital.