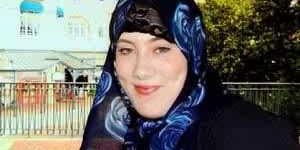 Indications have emerged that Samantha Lewthwaite, the British widow known as “White Widow” accused of masterminding the terrorist attack on Kenyan shopping mall in which over 60 people were killed, was in Nigeria and evaded detection, according to a report in the UK-based newspaper, Daily Mirror.

According to the newspaper, “In Nigeria, where police forces are notoriously corrupt, there were reports that she (Lewthwaite) was almost caught a while ago, but she bribed her way out of trouble.”

The full report read: “If White Widow Samantha Lewthwaite is on the run she will be hard to catch. If a Lewthwaite were to be on the run in Kenya, Nigeria or Somalia, it would be a easier to evade detection than in Europe.

“She would be wearing a veil, and sensitivities about searching Muslim women would be observed so she could easily slip through difficult checkpoints.
“In Nigeria, where police forces are notoriously corrupt, there were reports she was almost caught a while ago, but she bribed her way out of trouble,” the news report said.
“Extremist communities such as al-Shabaab are tight-knit in these countries, making it difficult to recruit agents to penetrate them and trace her.

“And Lewthwaite may hold a great deal of power as a special kind of jihadist, having proved her worth in previous attacks.

“As a white convert mum and widow of a 7/7 bomber, she would be invaluable propaganda and would command huge loyalty.

“Also, the austere nature of her adopted culture means she would rarely go out, so there would be few opportunities to follow her.

“Bounties have failed to nail jihadists as money has no value to individuals loyal to the cause.”

Meanwhile, the Nigerian Ambassador to Kenya, Ambassador Akin Oyateru, yesterday confirmed that no Nigerian citizen was affected in the terrorist attacks or involved with the terrorists in the Westgate Shopping Mall attacks which ended Tuesday after a four-day siege.

“We have gone through the list with a fine tooth comb and found no Nigerian name among the dead or the injured,” Oyateru told journalists.

The ambassador recalled that at the time the siege started, most members of the Nigerian community were attending a pan-Nigerian meeting at a hotel in the central part of the city.

“The meeting was immediately secured and the Nigerians given security briefing,” he disclosed.

Oyateru, however, expressed Nigeria’s condolences to the government and people of Kenya.

He called on the Nigerian community in Kenya to heed to the calls for blood donations for the injured and also contribute to the relief efforts in whatever way they could.

The Nigerian Mission in Nairobi, he disclosed, has already donated a modest sum of money to assist towards relief efforts, he said.

“Neither the Kenyan or Nigerian government or any other government would succumb to blackmail. These are people feeding on the Fun of violence, they have no cause, they just indulge in mindless killings,” he said.

He appealed to the public to always be vigilant and report suspicious activities to security agencies.

“Terrorism is a transnational problem that confronts all nations and everyone has to work together to combat this. Kenya has responded that it will not pull out of Somalia, it will stay for as long as it is required,” Oyateru said.