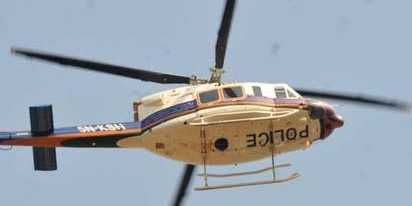 ENUGU — The Air wing of the Nigeria Police Force, NAF, will soon commence surveillance of the five South East states.
As a result of this, the police authorities have approved the construction of a helipad for Heliporters at the Emene Industrial Layout Extension, near Enugu which is a distance of about three kilometers from the Akanu Ibiam International Airport for the exercise.

Work on the air strip for the helipad being undertaken by Enugu State government has reached an advanced stage and sources said the police helicopters were being expected in Enugu to commence air surveillance of the entire South East zone.

It was learnt that the police decided to site the Helipad in the zone to ensure quick response to distress calls arising from security threats in any of the five states of south east.

Enugu State government which agreed to finance the construction of the Helipad has already approved N119,713, 275.26 for the project which includes completion of the external works.

The State Commissioner for Information, Mr. Chuks Ugwoke who spoke on the issue in Enugu, said that the state government undertook the project as part of its support to the police force.

He said that government was already handling the construction of the Hanger which would also serve as the Police Helicopter administrative block and a guest house, adding that work on the project was almost completed.

Ugwoke further said that the money approved for the project would ensure the construction of the Helipad and other external works like concrete drains, fire-fighting equipment, generators and taxi park, among others.
Source vanguard