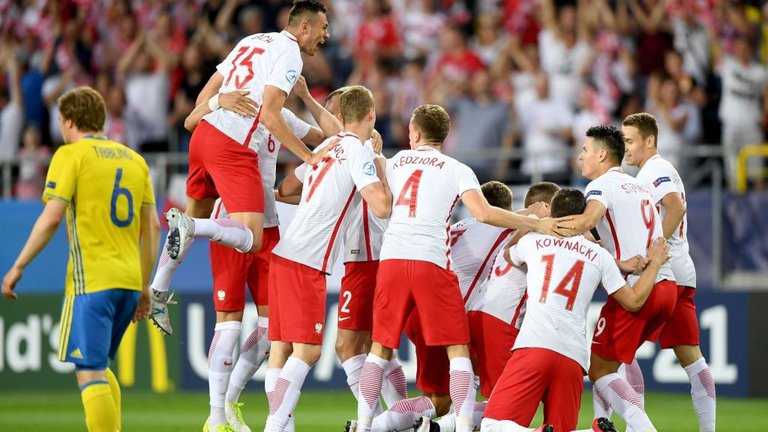 Hosts Poland kept their chances of making the semi-finals of the European U21 Championship alive with a late 2-2 draw against Sweden on Monday night.

Dawid Kownacki stepped up to slot home from the spot in second half stoppage time to deny the holders the victory they had seemed destined for since taking the lead before half-time.

The Poles got off to the perfect start as Lukasz Moneta fired them into a sixth-minute lead, but Sweden struck back with goals from Carlos Strandberg and Jacob Larsson.

The result puts England in pole position in a tight Group A following the victory over Slovakia earlier in the day that put them top on four points, with all four teams still able to progress heading into the final round of games.

Poland had lost their first game of the tournament against Slovakia and, determined to hit the ground running, managed to get themselves into an early lead. Kownacki got down the right before crossing for Moneta, and he had the simplest of tasks to slot home.

Swede improved as the half went on, though, and found themselves level on 36 minutes through Strandberg. The striker, who had earlier been booked for diving, headed in from close range after Jakub Wrabel spilled a shot into his path.

And after 42 minutes they were in front thanks to Larsson, who was quickest onto a Kristoffer Olsson corner to make it 2-1.

Poland needed a win to avoid crashing out of their own tournament, but struggled to regain their early momentum in the second half as Sweden continued to look comfortable.

Finally they did start to put pressure on in the closing stages, and the breakthrough came in the first minute of stoppage time as Filip Dagerstal pulled down Krzysztof Piatek in the box, and Kownacki stepped up to coolly equalise.

Man of the match

Poland might have been on the back foot for the majority of the game, but any positive play came through Polish midfielder Linetty.

It was evident to see that the Sampdoria player had plenty of professional games under his belt given the way he handled the pressure of potentially exiting the tournament early. He was instrumental in both goals that Poland scored.

Next up for Sweden is a match against Slovakia in their final Group A game, while hosts Poland face England with both games at 7.45pm on Friday.