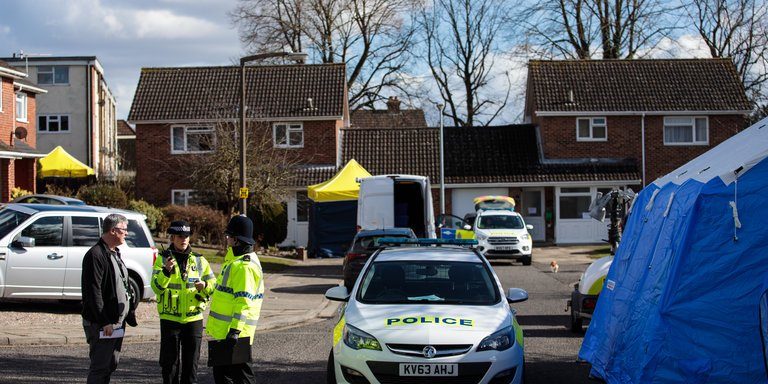 LONDON — British officials investigating the poisoning of Sergei V. Skripal, a former Russian double agent, believe it is likely that an assassin smeared a nerve agent on the door handle at his home. This operation is seen as so risky and sensitive that it is unlikely to have been undertaken without approval from the Kremlin, according to officials who have been briefed on the early findings of the inquiry.

This theory suggests that an assassin, who Britain believes was working on behalf of the Russian government, walked up to the door of Mr. Skripal’s brick home on a quiet street in Salisbury on March 4, the day that he and his daughter, Yulia, were sickened.

Mr. Skripal, who was freed in a spy swap with the United States in 2010, is still in critical condition and unresponsive, but Yulia is conscious and talking, according to a BBC report.

Because the nerve agent is so potent, the officials said, the task could have been carried out only by trained professionals familiar with chemical weapons. British and American officials are skeptical that independent actors could have carried out such a risky operation or obtained the agent without approval at the highest levels of the Russian government — almost exactly the same phrase that American intelligence agencies used in October 2016, when they first attributed the hacking of emails from the Democratic National Committee to a team of Russian hackers.

Four weeks after the assassination attempt, British and American officials are turning to the question of whether President Vladimir V. Putin himself was aware of, or ordered, the attack.

They say there is no evidence so far of his direct participation, but the Russian president, a former K.G.B. officer, is skilled at hiding his communications.

Russia has denied involvement in the poisoning, and in the election hack.

British and American officials say they are struck by the symbolism of the attack on Mr. Skripal, as well as its effectiveness. There were many ways the former spy could have been killed: He could have been shot, or killed in a staged accident.

But the assassins knew the nerve agent would be identified, and knew it would be linked to Russia, the officials said. That was meant to send a chilling message to others who would think of defecting to, or informing, the West.

And by conducting the operation in an historical British town, some distance from London, the attack was meant to indicate that no place was out of reach of Russian assassins, the officials said.

The boldness of the attack on Mr. Skripal, which took British authorities by surprise, has caused them to reassess Mr. Putin’s use of what has come to be called “hybrid warfare.”

The officials are now viewing those actions as part of a pattern — one rarely seen in the Cold War — in which Mr. Putin exerts Russian power in ways that are hard to attribute directly to Russian actors, but leave little doubt in the minds of adversaries about the country’s willingness to use a range of new tactics.

NATO allies are now thinking anew about coordinated responses, which is what the simultaneous ouster of the Russian agents was intended to represent. But it is unclear whether those countries can hold together in a continuous series of confrontations with Russia.

Eight days after the Skripals collapsed, Prime Minister Theresa May identified the poison as Novichok, developed in the last years of the Soviet Union.

For an assassin to leave poison on Mr. Skripal’s door handle would require considerable knowledge of the underlying chemistry, said Richard Guthrie, an independent chemical weapons expert and editor of CBW Events.

The nerve agent would have to be designed so that it would remain on the door handle, and then reliably be transferred to the target’s hand, he said.

“It’s a huge implication, if it was the door handle, because it means someone had to be in the U.K. with the material,” Mr. Guthrie said. “Anything you create that would stick to the door handle, you’ve got to make it so that it would be removed from the door handle when it was handled, and not dropped off too quickly. That’s complicated chemistry.”

The assassin, he added, would have had to possess a high confidence that his target would be affected, because, he said, “you don’t want to stand in front of the front door.”

Alastair Hay, an emeritus professor of toxicology at the University of Leeds, agreed that such an attack would require specialized knowledge, to ensure the poison adhered to the door handle but felt innocuous to the targets.

“Once they touched it, they would know that this handle was wet,” Professor Hay said. “But they would not have dreamed that someone was trying to poison them. If they had, they would try to wipe it off.”

Some experts have expressed caution about assuming that Mr. Putin approved the attack. Its timing was awkward, coming too late to help him much in last month’s election, and casting a diplomatic shadow over Russia’s hosting of the 2018 World Cup.

And the Kremlin’s embrace of proxy forces in recent years has opened the door to freelancing from other power centers, like security agencies or the country’s military intelligence, which may not share their plans in detail.

In their consultation with the United States and other allies, British officials shared a three-part case against Russia, the officials said.

The first element was an analysis of the nerve agent provided by mass spectrometry, a technique that sorts ions based on their mass-to-charge ratio. If the sample is strong enough, this technique could provide scientists with a chemical signature identifying its national source or even the specific laboratory that produced it, said Paul F. Walker, a chemical weapons expert at Green Cross International, a disarmament advocacy group.

The second element was evidence that Russia had publicly stated its intent to assassinate defectors living abroad. British officials pointed to 2006 legislation passed by the Russian Parliament, which granted Russia’s president expanded powers to use force against opponents living in other countries.

Russia has never acknowledged using the authority under the law, and has denied any role in high-profile deaths, like that of Alexander V. Litvinenko, a former Russian K.G.B. officer who was poisoned with a rare and highly radioactive isotope known as Polonium 210 a few months after it was passed.

A third element of the British case against Russia consisted of intelligence — either human intelligence, intercepted communications or other information — that the officials would not share.

The dispute between Russia and Britain deepened last week, after the United States and European allies expelled more than than 150 Russian diplomats suspected of being spies.

Russia’s government has said it “insists on the right” to visit Ms. Skripal, a Russian citizen. The British foreign office has said it will consider Russia’s request, taking into consideration both international law and Ms. Skripal’s wishes.

Russia also protested the search of an Aeroflot passenger jet on Friday after it traveled from Moscow to London’s Heathrow Airport, and said that the British Border Force had tried to search the plane in the absence of its crew or captain. Ben Wallace, the British security minister, said there was nothing unusual about the search.

“It is routine for Border Force to search aircraft to protect the U.K. from organized crime and from those who attempt to bring harmful substances like drugs or firearms into the country,” Mr. Wallace said.

Russia on Saturday also released a list of questions addressed to Britain, France and the Organization for the Prohibition of Chemical Weapons, which will hold a meeting on Tuesday to discuss the Skripal poisoning.

The questions scrutinize the British claim that the nerve agent originated in Russia, noting that an antidote was provided to the Skripals within hours of their poisoning, and questioning whether British scientists had produced Novichok nerve agents in their own laboratories.

Ellen Barry reported from London and David Sanger from Washington.