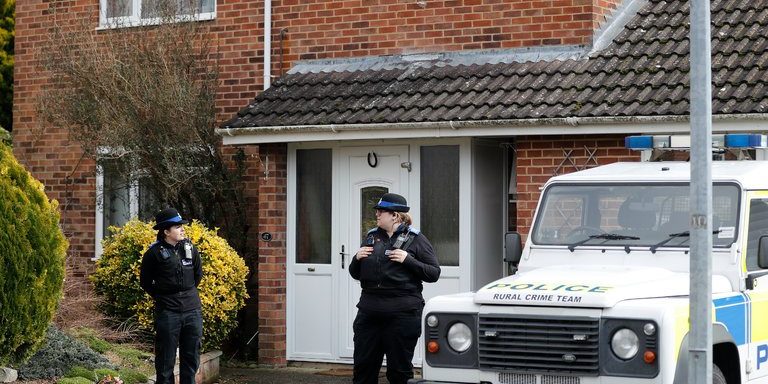 LONDON — The British authorities said on Wednesday that Sergei V. Skripal and his daughter, Yulia, the poison victims at the epicenter of a diplomatic crisis between Russia and the West, had been sickened with a nerve agent on the front door of Mr. Skripal’s house.

The announcement narrows the many possibilities of how the Skripals came into contact with the poison.

Detectives will focus their efforts now on Mr. Skripal’s house in the cathedral town of Salisbury, England, said Dean Haydon, senior national coordinator for counterterrorism policing, in a news release.

They will also, presumably, search for a person who could have delivered the poison.

Mr. Skripal, a former Russian double agent, and his daughter, who had been visiting him from Russia, were found unresponsive on a bench in a Salisbury park on March 4.

Prime Minister Theresa May announced eight days later that they had been sickened with Novichok, a lethal nerve agent developed by Soviet scientists in the last years of the Soviet Union, and her government accused Russia of responsibility.

Russia angrily denied the accusation as hysterical Western propaganda, but the poisoning has escalated into an international crisis that has isolated the Kremlin. Two dozen countries, including the United States, sided with Britain, ordering scores of Russian diplomats expelled in retaliation.

Until now, investigators had been exploring the different ways the poison could have been delivered: a bouquet of flowers, or granules of the nerve agent in the ventilation system of Mr. Skripal’s car.

Trace elements of the nerve agent had been found in several spots, including a table where they had eaten lunch. Detectives pored over 5,000 hours of closed circuit television footage taken in Salisbury, looking for people who might have sprayed it on them, and taken statements from 500 witnesses.

Sgt. Nick Bailey, an emergency medical worker who was exposed to the nerve agent, became ill after going to the Skripal house, suggesting that the exposure occurred there.

The police will now remove cordons from a number of spaces the Skripals visited on the day they were sickened, including a mall and the cemetery where their family members, Lyudmila and Aleksandr Skripal, are buried.

The Skripals remain hospitalized, in critical condition. A court order allowing investigators to take blood samples for analysis last week held out little hope that either would fully recover.

“The precise effect of their exposure on their long-term health remains unclear, albeit medical tests indicate that their mental capacity might be compromised to an unknown and so far unascertained degree,” the court order read.

A version of this article appears in print on March 29, 2018, on Page A6 of the New York edition with the headline: Poison Was Left at Russian Ex-Spy’s Door, Police Say. Order Reprints| Today's Paper|Subscribe