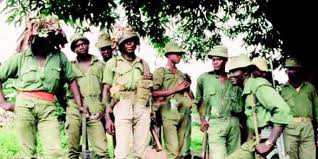 AUTHORITIES of the Military Pensions Board in Abuja have described plans by some ex-Biafran soldiers to storm Abuja and protest the non-payment of the benefits as uncalled for, noting that if they are genuine ex-soldiers, they should seek the necessary clearance and come for payment.

Chairman of the board, Commodore D.S Audu, who spoke with Nigerian Tribune on the issue, said so far, over 330 ex-Biafran soldiers and Air Force personnel had been cleared to enjoy the presidential pardon.

According to him, out of the number, the board initiated the publication of the beneficiaries in the national dailies, with instructions on how to go about collecting their benefits, to which they had responded without any hiccup.

“So, for any so called ex-Biafran soldier to come forward and claim that he is being owed benefits and he wants to embark on violent protest, that shows the person or persons are either fake or not genuine.

“We have the names and records of those that are genuine. Let those complaining come forward to prove their genuineness, then we will sort their matter out,” he said.

While explaining the procedures, the Director of Army Pensions, Colonel A. Akerele, noted that once the ex-soldiers showed up, their names would be sent to the Directorate of Army Records for verification and to see if they were gazetted.

“As I am talking to you now, for the Army, we have a list of 226 ex-Biafran soldiers that are qualified and gazetted and out of this number, about 110 have come forward for clearance.

“They have had their details taken into our biometric system, after which they got their money. So, if the ones complaining are sure that they are not fake, let them come and prove it,” he said.