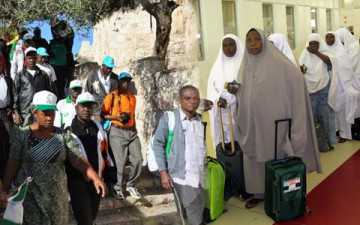 State governments, including those that owe workers’ salaries, organisations and individuals will spend nothing less than N70bn on the 2015 pilgrimages to Mecca and Jerusalem.

The National Hajj Commission of Nigeria recently announced 76,000 slots allocated to Nigeria by the Kingdom of Saudi Arabia for the 2015 Hajj. Of the 76,000 slots, the NAHCON Media Director, Alhaji Uba Mana, said 66,000 had been allocated to the 36 states, the Federal Capital Territory and the Armed Forces.

The remaining 10,000 slots, he said, had been set aside for international pilgrims (Tour Operators).

An official of the Nigeria Christian Pilgrims Commission, who spoke on the condition of anonymity, said no fewer than 30,000 Nigerians performed the Christian pilgrimage to Israel, Rome and Greece in 2014. The figure, the source added, is not expected to drop in 2015.

In 2014, about 120,000 seats were approved by the Kingdom of Saudi Arabia for Nigeria for the Hajj operations, according to the commission.

Also, a statement on the Nigerian Christian Pilgrim Board titled, “General Pilgrimage Package (October -December 2015)” said it would cost a pilgrim whose destination is only Israel N379, 840.00; Israel/Rome, N462, 510.00; and Israel/Greece, N462, 510.00. The package includes air ticket, visa fee, feeding, accommodation and tour to Holy sites for 11 days.

It was also stated that the Christian pilgrimage is made three times annually.

The total amount of the costs of pilgrimage to Israel (N11.4bn) and Mecca (N57.6bn), which is largely borne by the government at all levels, is N69bn.

The three tiers of government in Nigeria have been involved in sponsorship of pilgrims to Mecca and Jerusalem over the years. The National Hajj Commission of Nigeria and the Nigeria Christian Pilgrim Commission got N765.65m and N576m allocations respectively in the 2012 budget.

A former Plateau State Commissioner for Water Resources and Rural Development, Malam Idi Waziri, said the state government spent over N300m on sponsoring 400 people to 2014 Hajj. Two hundred of the 400 people, he explained, were sponsored by the various local governments in the state.

The Kano State Government recently approved over N242m for the payment of intending pilgrims’ accommodation in Saudi Arabia for the 2015 Hajj.

Despite battling the Boko Haram insurgency, the Borno State Government also sponsored pilgrims to Mecca in 2015 with N500m. Each of the 2,645 pilgrims got a subsidy of 300 Saudi Riyals from the state government to perform the hadaya (slaughtering of animals during the Hajj).

Despite owing workers’ salaries without the hope of paying until they were bailed out by President Muhammadu Buhari, investigation revealed that states struggling financially are among those that will still sponsor people for pilgrimages.

A report by the Nigeria Labour Congress Task Force on Employees’ Salary Arrears revealed that 23 of the 36 states owed salaries or pension arrears as of June 15.

The Osun State Government, which has yet to constitute the Christian/Muslims Pilgrims Boards, will still sponsor pilgrims to holy lands this year, one of our correspondents learnt from a senior public servant in the state.

The source said, “There is no way the state government will stop sponsoring pilgrims but the number may be reduced this year because of the financial crisis.

“The era of sponsoring large number of pilgrims and wasting money to buy clothes and other items for them is over. But this thing has become part of our culture here so it can’t be stopped like that but the government may not be loud about it.”

Though Governor Rauf Aregbesola has yet to respond to the inquiry to know if the state is planning to stop the practice, Saturday PUNCH learnt that the state would sponsor pilgrims to Mecca.

But the Diocesan Bishop of Osun North-East Diocese, Church of Nigeria, Otan Ayegbaju, Rev. Bamisebi Olumakaiye, advised the governor to stop sponsoring Christians and Muslims on pilgrimages as one of the measures to plug loopholes through which public resources are being wasted.

Olumakaiye said, “Now that workers are hungry, all these projects should be stopped till the situation improves. Let us show seriousness and when workers see this, I believe they will return to work.

“Sponsoring of pilgrimages to Jerusalem or Mecca should be stopped until the salaries are paid and the situation improves.”

The Chairman, Osun State Christian Pilgrims Welfare Board, Prophet Adebunmi Isaac Alabi, declined to comment on the claim that the state government is planning to stop sponsoring of pilgrims to Mecca and Jerusalem because of the financial crisis.

Speaking on the telephone with one of our correspondents, Alabi said, “What concerns them if the state government decides to stop sponsoring pilgrims to Jerusalem. Were they the ones responsible for the sponsorship of those who had gone before now?”

Saturday PUNCH also learnt that a former Plateau State Governor, Jonah Jang, had already paid for the sponsorship of the 2015 pilgrims before he vacated office on May 29.

But Jang’s successor, Simon Lalong, dissolved the leadership of both the Muslim and Christian Pilgrim Welfare boards following the recommendation of the Lalong/Tyoden transition teams that pilgrimage should be left to the discretion of individuals.

A source in the committee, who spoke on the condition of anonymity, said, “In any case, we cannot be talking about sponsoring pilgrimages when we have many months of unpaid salaries and allowances. Even God will not be happy with such an action.”

The Director-General, Research and Documentation in the Office of the Plateau State Governor, John Wade, said the state government had yet to come up with its views on the recommendations of the transition committee.

Similarly, the Director of Press, Bauchi State Government House, Alhaji Ibrahim Sani, said the state would not suspend the sponsorship of pilgrims to Mecca and Jerusalem this year.

According to him, plans have reached an advanced level to ensure a hitch-free pilgrimage to Saudi Arabia.

He said previous governments sponsored nearly 3, 000 pilgrims annually, but added that the number could likely be reduced in line with the state’s current financial realities.

Sani said, “The governor identified a lot of leakages in the Hajj operations and is making efforts to stop them. It is not going to be business as usual regarding pilgrimages in the state.”

On the exact amount to be spent for the pilgrimages this year, Sani said, “I don’t know exactly how much the state government is budgeting for the two exercises. But I know that it will not be up to the amount spent last year.”

The Executive Secretary, Christian Pilgrims Welfare Board in the state, Ishaya Maleka, said the government had yet to make a statement as regards the pilgrimage to Jerusalem.

But he said, “I know that the government sponsored about 417 Christians for pilgrimage last year. I don’t know how many will be sponsored this year.”

Efforts to speak with the Deputy Secretary of the Muslim Pilgrims Welfare Board in the state failed as he insisted that he had no authority to speak to the press without permission from his superior, who was said to have been away to Saudi Arabia for the lesser Hajj.

The Niger State Government will still sponsor pilgrims to Mecca and Jerusalem even as it plans to cancel the sponsorship next year.

The Niger State Governor, Alhaji Abubakar Sani Bello, who spoke through his Chief Press Secretary, Dooba Ibraheem, expressed reservation over the sponsorship of the pilgrimages.

Of the four million population of the state, Ibraheem said only 3,000 people go to Hajj every year, adding that this should be revisited to save cost.

He said, “The governor wants to be prudent; he has said that by next year, the government will stop pilgrimage sponsorship.”

On how much was budgeted for this year’s pilgrimage, the governor’s spokesperson said, “The deputy governor is the head of the team. In fact, he came with a figure but the governor told him to reduce it. It was reduced from N1.2bn to N800m.”

Ogun State governor, Senator Ibikunle Amosun, is said to be sponsoring Muslim pilgrims to Saudi Arabia even before he became the governor.

Investigation revealed that Amosun has continued to sponsor quite a number of both Christian and Muslim pilgrims to Jerusalem and Saudi Arabia even after he was elected governor.

But the Chairman, Ogun State Muslim Pilgrims Welfare Board, Dr. Isiaq Yusuf, said, “The governor does not sponsor any Muslim to Saudi Arabia, anyone who wants to perform the pilgrimage comes forward and pay the required fees.”

Saturday PUNCH, however, learnt that the governor had sponsored and still sponsors a number of Muslims on pilgrimage to Saudi Arabia.

The Chief Press Secretary to the Governor of Enugu State, Mr. Uwakwe Abugu, said he was not aware of any plan by the state governor to stop funding Christian pilgrims to Jerusalem.

The Secretary of state Pilgrims Board, Dame Chinasa Nwaebiem, also said she was not aware of any plan to stop government funding of pilgrimages.

The Secretary, Christian Pilgrims Board, in Cross River State, Bassey Obeten, said the government had yet to tell the board of any intention to stop sponsoring pilgrimages.

One of the aides of the Chairman, Muslim wing of the Oyo State Pilgrims Welfare Board, , Alhaji Taofeek Akewugbagold, said the state sponsored 200 pilgrims to Mecca in 2014.

Although the state had pilgrims’ quota of 1,252 last year, he said there was the likelihood the number would increase this year.

Akewugbagold said, “The state quota used to be above 1,500, but because of repairs in a section of the worship centre, organisers from Saudi Arabia reduced every country’s quota. Nigeria used to have 95,000, but that has been reduced.

“The state can decide to sponsor more people but if the figure shoots beyond our quota, what we normally do is to shed the excess on international route.

Benue State will continue to sponsor pilgrimage to both Jerusalem and Mecca.

The state governor, Samuel Ortom, confirmed the position during the week when he hosted the Executive Secretary of the Nigerian Christian Pilgrimage Board, John Kennedy Okpara.

At least three states, Edo, Kano, and Kaduna have stopped funding religious pilgrimages while diverting the funds to other developmental areas.

Ekiti and Kwara have also joined the club.

The Chief Press Secretary to the Governor, Mr. Idowu Adelusi, said, “No sponsorship of pilgrimage this year because of the state of finances.”

The Kwara State Government has also stopped the sponsorship of both Christian and Muslim pilgrimages.

This was confirmed to Saturday PUNCH in separate interviews with the Senior Special Assistant to the Kwara State Governor, Alhaji Abdulfatah Ahmed, on Media and Communication, Dr. Muyideen Akorede; the Executive Secretary, Muslim Pilgrims Board, Hajia Fatimoh Jimoh and the Chairman, Kwara State Christian Pilgrims Board, Bishop Israel Amoo.

Akorede said the state government stopped the sponsorship of pilgrimages because of the dwindling revenue as a result of the fall in federal revenue allocations.

Akorede said, “It is needful for the state government to stop the sponsorship of pilgrimages because of the prevailing economic situation. If this is one of the sacrifices we have to make, I think the residents are willing to make it. Religion is a personal thing.”