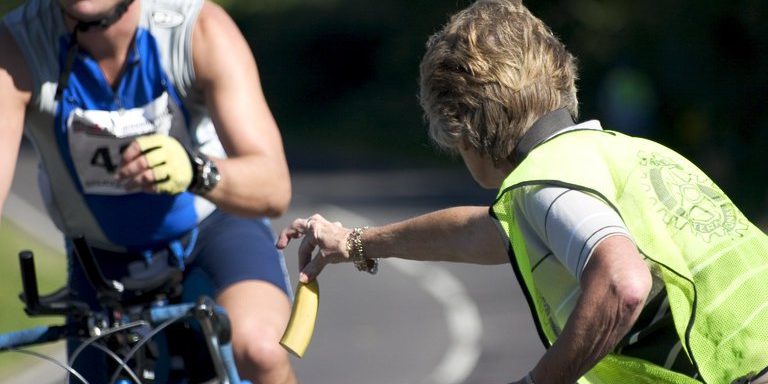 A banana might reasonably replace sports drinks for those of us who rely on carbohydrates to fuel exercise and speed recovery, according to a new study comparing the cellular effects of carbohydrates consumed during sports.

It found that a banana, with its all-natural package, provides comparable or greater anti-inflammatory and other benefits for athletes than sports drinks. But there may be a downside, and it involves bloating.

For decades, athletes and their advisers have believed, and studies have confirmed, that eating or drinking carbohydrates during prolonged exertion can enable someone to continue for longer or at higher intensities and recover more quickly afterward than if he or she does not eat during the workout.

The carbohydrates rapidly fuel muscles, lessening some of the physiological stress of working out and prompting less inflammation afterward.

The most digestible and portable form of carbohydrates is sugar, whether glucose, fructose or sucrose, and for athletes, this sugar frequently is provided through sports drinks.

But sports drinks are not a substance found in the natural world. They are manufactured and can contain flavorings and chemicals that some people might wish to avoid.

So a few years ago, researchers at the North Carolina Research Campus of Appalachian State University in Kannapolis, began to wonder about fruits as a healthier alternative to sports drinks during exercise.

Most fruits, including bananas, are sugary and high in fructose; fructose, after all, means fruit sugar. But they also contain other natural substances that might have an impact on sport performance and recovery, the researchers speculated.

In a preliminary experiment, published in 2012, the scientists found that cyclists performed better during a strenuous bike ride if they had either a banana or a sports drink compared to only water. They also developed lower levels of inflammation in their bodies afterward.

But that study had left many questions unanswered, particularly about whether and how the carbohydrates might be aiding athletes’ recovery.

So for the new experiment, which was published last month in PLOS One, the researchers decided to use more sophisticated techniques to track molecular changes inside cyclists’ bodies.

(Dole Foods, which sells bananas, partially funded both studies. According to a statement in the study, the company did not have any involvement in “the study design, data collection and analysis, decision to publish or preparation of the manuscript.”)

The researchers asked 20 competitive cyclists, male and female, to complete a grueling 47-mile (75-kilometer) bike ride on several occasions at the campus performance lab. During one ride, they drank only water. In the others, they had water, but also eight ounces of a sports drink or about half of a banana every 30 minutes.

The scientists drew blood before the workout, immediately after, and at several additional points, stretching out to 45 hours later.

They then checked the blood for markers of inflammation and levels of hundreds of molecules, known as metabolites, that can change during and after exertion and signify how much stress the body feels.

They also isolated blood cells to look at the activity of certain genes involved in inflammation.

As they had expected, the scientists found that swallowing only water resulted in relatively high levels of inflammatory markers in the riders’ blood. These markers were much lower if the cyclists had consumed fruit or the sports drink.

The volunteers also showed less-stressed metabolite profiles if they had had carbohydrates during their rides, whether those calories had come from a bottle or a banana.

But there were differences in the activity of some genes. In particular, the scientists found that the riders’ blood cells produced less of a genetic precursor of an enzyme known as COX-2 if they had eaten bananas during their workout. This effect was not seen if they had drunk the sports drink or only water.

The COX-2 enzyme prompts the production of prostaglandins, which, in turn, intensify inflammation. Less of the genetic precursor in cells after a workout should mean less COX-2 and reduced inflammation, says David Nieman, the director of the human performance lab at Appalachian State University and the study’s lead author.

He points out that anti-inflammatory drugs such as ibuprofen work by inhibiting COX-2, but, until now, researchers had not considered that bananas might perform comparably.

How the fruit manages to affect the cells’ gene expression after exercise is still not known, however, he says.

He and his colleagues also do not know whether half of a standard banana every 30 minutes is the ideal amount of the fruit during exertion. Although it provided as many carbohydrates as in a cup of the sports drink, it also resulted in “quite a bit of bloating,” he says, which might dampen some athletes’ enthusiasm.

He and his colleagues plan to explore those issues in future studies and also look into the effects of other fruits. “Dates have even more sugar than bananas,” Dr. Nieman says.

In the meantime, he says, for exercisers who might prefer a natural, inexpensive and neatly packaged alternative to sports drinks, “bananas look pretty good.”