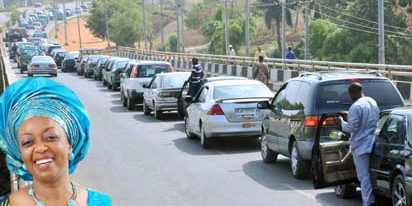 ‘Premium motor spirit’ witnessed throughout the nation in the past few months was caused by factors beyond the control of the corporation.
The corporation said there was a political undertone to the fuel scarcity.
The Executive Director, Port Harcourt operations, Engineer Ahamefula Ugochukwu made this known during the corporation’s special day at the ongoing 25th Enugu international trade fair.
Ugochukwu, who represented the Group Managing Director of NNPC, Engr. Andrew Yakubu at the event, said there were peculiar reasons why he would not give details of the political undertone. He, however said that it was good a thing that the scarcity is gradually coming to an end, since the products are now available even though selling at a price, which is above normal pump price.
He stressed that the Kaduna and Warri refineries are being restored to perform in full capacity which to a large extent is restoring hope in the efficacy of refineries. The major problem with the Port Harcourt refinery he said is the consistent vandalisation of the pipelines which indirectly is another cause of the artificial scarcity of the products in the South East zone of the country.
However, the corporation is reaching out to the traditional institution in the various communities on how to curtail the act.
According to him, part of the roadmap to make NNPC competitive in the global market is also to collaborate with the National Assembly to ensure the passage of the Petroleum Industry Bill, PIB.
“The PIB, he explained was a change legislation which promises to offer our corporation all the necessary incentives to enable it excel,” he explained