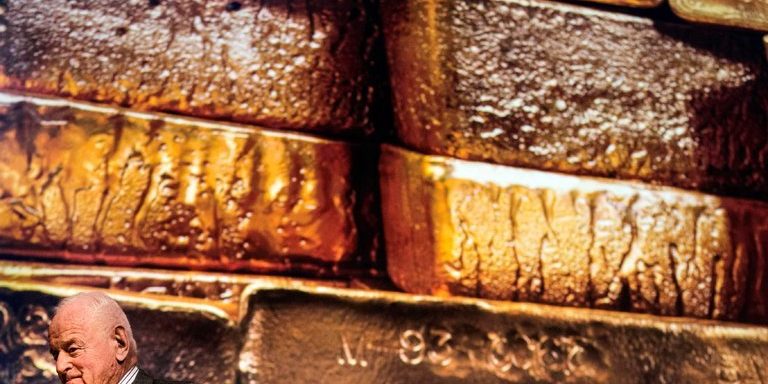 Peter Munk, the Canadian who built the world’s largest gold-mining company, years after suffering one of his country’s most notable business failures, died on Wednesday in Toronto. He was 90.

Barrick Gold, the company he founded, announced the death but did not give a cause. Mr. Munk wore a pacemaker and had dealt with heart problems for several years.

An outsider in Canada — his preference for fedoras alone set him apart — and a former escapee from Nazi-occupied Hungary, Mr. Munk initially tried out several different lines of business, including stereo equipment and resorts in Fuji. Not all were successful, but he never appeared deterred by his failures.

Barrick itself started out as an oil company that endured three years of losses. Then Mr. Munk began acquiring gold mines in Canada and the United States. Most were small ventures. But in 1986 he bought Goldstrike, a mine in Nevada that was estimated to hold 600,000 ounces of gold. As it turned out, it held more than 21 million ounces, making it the richest deposit outside of South Africa at the time.

Barrick grew through expansion, and with the acquisition in 2006 of Placer Dome, a British Columbia-based mining company, it became the world’s largest gold miner.

And it made Mr. Munk immensely wealthy, though there are few good estimates of his fortune. He controlled Barrick without holding most of its shares. In 2013, it was estimated that he owned only 0.2 percent of its stock.

But Mr. Munk led the life of an international billionaire. He had three homes in Ontario and houses in Paris and Switzerland, where he remained a keen skier late in life, and took to the sea in a 140-foot-long yacht, the Golden Eagle.

As Barrick expanded globally, Mr. Munk often dealt with governments with widely condemned human-rights records. He devoted part of Barrick’s annual meeting in 1996 to praising the economic program of Gen. Augusto Pinochet, the former military dictator in Chile, although Mr. Munk subsequently condemned General Pinochet’s human rights abuses in a letter to the newspaper The Globe and Mail.

An electrical engineer by training, Mr. Munk often attributed his success at Barrick to his lack of a mining background. That meant, he said, that he made decisions about his company almost entirely from a financial perspective, introducing measures that offset the inevitable financial risks of mining.

“For 100 years it was assumed that a successful mining company had to be run by miners,” he told The Economist in 2014. “What I did know was how to run a business. The investor doesn’t give a damn about what you know about mining. They want results.”

For all of Barrick’s later success, it was his stereo equipment company, Clairtone — Mr. Munk’s first big venture and his greatest humiliation — that most shaped his approach to business.

“Clairtone was the single-most formative experience in my life, because it was so traumatic,” he told The New York Times in 1993.

He set off to manufacture stereo equipment in 1959 with David Gilmour, a friend, and the help of 2,800 Canadian dollars from the father of Mr. Munk’s first wife, the former Linda Gutterson. The audio gear became popular internationally as much for its futuristic design as for its sound. Clairtone stereos appeared in films starring Frank Sinatra and Sean Connery.

The company’s success led to a move from Toronto to a large manufacturing plant in Nova Scotia, drawn in part by the province’s offer of 7 million Canadian dollars in assistance. Overwhelmed by a variety of problems, however, including an unsuccessful move into television and poor management of the company’s growth, the founders were ousted in 1968. Clairtone collapsed six years later.

Mr. Munk was born into a Jewish family in Budapest on Nov. 8, 1927. When the Nazis occupied Hungary in 1944, Mr. Munk’s grandfather Gabriel, a chocolate distributor and real estate investor, used most of the family fortune to secure train passage to Switzerland for 14 family members, including Mr. Munk and his father, Lajos.

The trip was organized by the Hungarian journalist Rezso Kasztner, who was credited with saving thousands of Hungarian Jews by shepherding them to Switzerland.

By then Mr. Munk’s parents had long been divorced, and his mother, the former Katharina Adler, did not join the group. She was later sent to Auschwitz but survived.

By some accounts, his mother is credited with suggesting that Mr. Munk join an uncle in Canada. At 20, he left Switzerland for Toronto on a student visa to study at the University of Toronto. The odd jobs that financed his studies included selling Christmas trees.

“When he landed in Canada, he was stunned by what he viewed as a relatively pleasant atmosphere,” said Anna Porter, a friend, former publisher and author of a book about Kasztner and his wartime rescue missions.

Throughout his business career, Mr. Munk publicly bemoaned the sale of Canadian corporations to foreign investors. “He chose to see himself as a nationalist,” Ms. Porter said.

His first marriage ended in divorce. He is survived by his wife, the former Melanie Jane Bosanquet, whom he married in 1973; five children, Anthony, Nina, Marc-David and Natalie Munk and Cheyne Munk Beys; and 14 grandchildren.

In addition to Barrick, Mr. Munk controlled Trizac Properties, whose holdings included the Watergate complex in Washington until 2006. Mr. Munk retired from Barrick in 2014, but he continued to insist in interviews that he had never stopped working.

As a philanthropist, Mr. Munk donated about 300 million Canadian dollars (about $232 million in American money today) to a variety of medical and academic centers. He also devoted much of his time to turning a former naval base in Montenegro into a superyacht marina.

When he sold the marina in 2016, Mr. Munk told The Globe and Mail that when he first arrived in Montenegro, appearing to many as a Canadian interloper, he was greeted with more than suspicion.

“I was threatened physically,” he said. “They spat on my taxi.” But he won the Montenegrins over, he said. “Today they love what we’ve done,” he said.