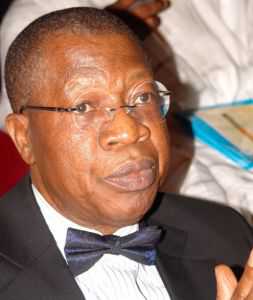 Its Publicity Secretary, Alhaji Lai Mohammed, said the plot has confirmed that the ruling party is jittery and afraid of imminent failure.

He spoke to reporters in Lagos that a rash of court cases have been instituted in an unrelenting effort to frustrate APC and Buhari by elements he described as compromised fronts.

Mohammed warned against the consequence of compromising the courts, saying that it is dangerous for democracy.

He added:  “At the last count, at least four cases have been filed by those who are undoubtedly fronting for the PDP and the Presidency, and all are working towards the same goal: stop Buhari, scuttle next month’s elections. We expect more cases to be filed in pursuit of this ignominious objective.”

Mohammed recalled that Buhari emerged as the APC candidate at a transparent primary election in Lagos, adding that he has met all the requirements to run for the Presidency.

He said although the PDP expected the APC to be enmeshed in controversy over the choice of a vice presidential candidate, the emergence of Prof. Yemi Osinbajo (SAN) as Buhari’s running mate has been hailed by Nigerians.

The Publicity Secretary also said that Buhari also triumphed over his foes who had fuelled the speculation that he has no secondary school certificate.

He lamented that the PDP and the Presidency, which manipulated court workers to embark on strike to stop the courts from hearing cases that could be detrimental to Dr, Jonathan, have also manipulated the same elements to end the strike so that the cases against Buhari could commence.

Mohammed said: “This stop-Buhari-at-all-cost campaign is being pursued simultaneously with the push to postpone next months elections, ostensibly because of the low level of PVC distribution, but in the real sense, an implementation of the mindset of the Presidency never to hand over to Gen. Buhari, and then, of course, set up an interim government .”

He added: “It is in view of the multiplicity of court cases at this late hour that we have decided to alert Nigerians to the execrable plan of the PDP and the Presidency. We have also decided to appeal directly to the Chief Justice of Nigeria (CJN) to stoutly defend the independence and integrity of the judiciary at this critical moment, to avoid a repeat of what transpired in 1993 when unscrupulous elements constituted themselves into the infamous Association for Better Nigeria (ABN) that was used to annul the 1993 general elections, thus aborting the Third Republic and throwing the country into a deep and prolonged crisis.

“The rumour mill is spinning fast. Stories abound of a huge war chest of 100 million dollars being earmarked to grease the palm of any pliable Judge who can disqualify Gen. Buhari and halt the electoral process. We do not know whether or not this allegation is true, but we do know that Nigerians do not want to return to ‘Egypt’. We have been down this road before with disastrous consequences, and we do not want to tread that path again. Never before has so much been deployed just to stop the candidacy of just one man!

“While we are at this, may we also alert Nigerians and the global community to the systematic denial of visas to foreign journalists wishing to cover next month’s election. A regime that has nothing to hide or fear will not hesitate to allow international coverage of what is undoubtedly one of the most important elections in the world this year! Information reaching us indicates that most of the foreign journalists who applied for visas to travel to Nigeria, from different parts of the world, for the elections have been kept in abeyance under the guise of security clearance. This is totally unacceptable, and it is another indication that this Administration has a lot of skeletons in its cupboard as far as the forthcoming election is concerned. We ask local and international observers to take note of this, and to immediately take the Administration to task with a view to ameliorating the situation.

“We will like to ask the PDP and the Presidency: Why are you so frightened by Gen. Buhari’s candidacy for the office of the President? Why are you so terrified of facing Gen. Buhari at the polls? Why have you been engaging in a clandestine campaign to postpone the elections, when on the other hand you claim to be ready? If Gen. Buhari ran in 2003, 2007 and 2011, and there was never an issue with his meeting the pre-requisite qualification, why have you made it an issue now? Is it because you have realized that he is poised to shellack President Jonathan at the polls? Why is an interim government an option when Nigerians are willing and eager to vote next month?

“While we will continue to appeal to our members and supporters to remain calm, we call on them, and indeed all Nigerians, to be vigilant, knowing that eternal vigilance is the price of liberty. We urged the CJN to be a bulwark against the abuse of the courts just to achieve a pre-determined end.

“We call on the international community to take note of the multi-faceted campaign to stop Gen. Buhari at all cost and scuttle next month’s elections to pave the way for an interim government that will benefit no one but the PDP, the Jonathan Administration and its cronies.”

The Presidential Campaign Organisation of the APC  also  alerted of an organised plan to use the court to scuttle the forth coming elections to pave way for the declaration of a six month state of emergency in the country.

The organisation, in a statement in Abuja said the Jonathan-led government has prepared Judge to rule that the APC Presidential Candidate lied on oath that his certificates are with the military and therefore disqualify him  from participating in the election.

The statement signed by Director of Media and Publicity of the campaign, Mallam Garba Shehu, said the counter arguments by the APC candidate’s counsel on the issue would not matter because the particular Federal High Judge has been prepared to do a dirty job.

He added that the calculation of those planning the evil was the pronouncement of disqualification of the APC candidate is expected to precipitate spontaneous violent protests across the country. Which will then enable President Goodluck Jonathan who is the People’s Democratic Party (PDP) candidate to declare a six-month state of emergency.

Shehu said further that the three-week long strike action by the Judiciary Staff Union of Nigeria (JUSUN) was embarked upon on the prodding of the PDP-led Federal government as a way to stymie any higher Court upturning of the lower Court pronouncement which ruled on President Jonathan’s eligibility to contest the February 14 election.

He alleged that the same trade union has been procured to open the Court to allow for this Court Pronouncement in disqualifying General Buhari from contesting the elections.

“We are aware of the intense desperation of the PDP-led Federal government of Dr. Goodluck Jonathan in desiring to retain political power at all costs despite his and his party’s overwhelming rejection by the Nigerian people, ahead of the 2015 general election.

The APC Campaign organisation called on the International community to prevail on this obviously agitated presidency not to plunge the Nigerian State into avoidable intractable crisis.