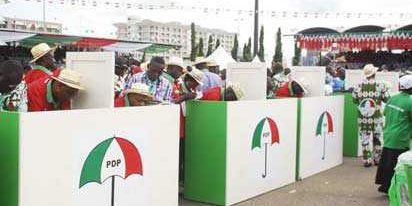 A Federal High Court sitting in Abuja on Friday turned down a request brought by the Bamanga Tukur’s faction of the Peoples Democratic Party (PDP) against Abubakar Baraje’s faction seeking an interim order of maintaining the status quo pending when the substantive suit would be heard.Tukur had on Thursday asked the court to grant the order pending the determination of the suit he brought seeking to restrain the Abubakar Baraje’s faction from parading itself as the recognised faction of the party. Delivering ruling, however, the presiding judge, Justice E. S. Chukwu, held that he did not observe any tardiness on the part of the new faction as claimed by the Bamanga Tukur-led faction.

The court also consolidated the application challenging its jurisdiction and the substantive suit. It also held that it did not notice any negligence on the part of the new faction in filing its processes and entering an appearance against the position of the Tukur side.The judge later adjourned till September 20 for hearing of the substantive suit.Baraje’s faction had, however, prayed the court to strike out the suit brought by Tukur on the ground that it lacked jurisdiction to entertain same.Saturday Tribune recalls that Tukur and 11 national officers of the PDP had last Friday, through an ex-parte motion, asked the court to stop Baraje, Dr. Sam Jaja, Prince Olagunsoye Oyinlola and Alhaji Atiku Abubakar from parading themselves as the national executives of the party.

The court then ordered the Tukur faction to put the Baraje group on notice, and fixed yesterday to hear the suit.Counsel to Baraje’s faction, Ahmed Raji (SAN), informed the court that they had filed a preliminary objection challenging the court’s jurisdiction to hear the suit.In the preliminary objection, the Baraje group submitted that the subject matter of the suit had to do with domestic affairs of the PDP and that the suit should have been brought before a state or Federal Capital Territory High Court, instead of the Federal High Court.