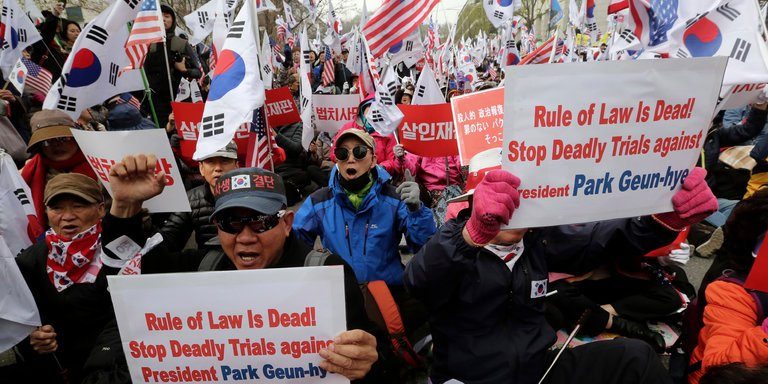 SEOUL, South Korea — Park Geun-hye, South Korea’s impeached and ousted president, was sentenced on Friday to 24 years in prison on a variety of criminal charges, in a case that exposed the entrenched, collusive ties between South Korea’s government and huge conglomerates like Samsung.

A three-judge panel at the Seoul Central District Court also ordered Ms. Park to pay $17 million in fines, in a ruling that marked a climactic moment in an influence-peddling scandal that shook the country’s political and business worlds.

Ms. Park’s conviction on bribery, coercion, abuse of power and other charges was the first lower-court ruling on a criminal case to be broadcast live in South Korea. She is the country’s first former leader to be arrested and convicted of crimes since two former military-backed presidents were found guilty of sedition and corruption in the 1990s.

Ms. Park did not appear in court for her case on Friday. She has refused to attend any court hearings since October, staying in her solitary prison cell, complaining of poor health and insisting that she is the victim of a political conspiracy.

Although Ms. Park is expected to appeal her prison term, the sentencing is likely to bring a sense of closure to the corruption scandal that engulfed her. Her supporters, mostly elderly South Koreans, have insisted on her innocence, and hundreds of them protested outside the courthouse Friday, demanding her release and calling her a victim of “political revenge.”

Following weeks of huge demonstrations calling for her ouster, the National Assembly impeached Ms. Park in December 2016 on charges of bribery and abuse of presidential power. In March of last year, the Constitutional Court upheld the assembly’s decision, making Ms. Park the first South Korean leader to be removed from office through parliamentary impeachment. She was arrested three weeks later.

At the center of the scandal that toppled Ms. Park’s government is the allegation that she and Choi Soon-sil, a longtime friend and confidant, collected or demanded large bribes from three big businesses, including Samsung, the country’s largest family-controlled conglomerate. Separately, the two women were accused of coercing 18 businesses into making donations worth $72 million to two foundations that Ms. Choi controlled.

The same court panel that handled Ms. Park’s case called her and Ms. Choi criminal co-conspirators when it sentenced Ms. Choi to 20 years in prison on Feb. 13 on bribery, extortion and other criminal charges.

Ms. Park has tearfully apologized to the public, cutting ties with Ms. Choi and insisting that she was not aware of many of her friend’s illegal activities. Her lawyers also appealed for leniency, arguing that the money collected from big businesses was not used for her personal gain. Some of the alleged bribes taken from Samsung were used to finance the equestrian pursuits of Ms. Choi’s daughter.

In Friday’s verdict, Ms. Park was convicted of collecting or demanding nearly $22 million in bribes from three of South Korea’s top business conglomerates, including Samsung, Lotte and SK. Separately, she was found guilty of coercing the three companies — and 15 other businesses — into making donations worth $72 million to two foundations controlled by Ms. Choi.

The former president was also found guilty of abusing her power to help Ms. Choi and her associates win lucrative business contracts from big businesses, and of blacklisting artists, writers and movie directors deemed unfriendly to her government, excluding them from state support programs.

”The accused caused chaos in state affairs by abusing the power given to her by the people, and it is necessary to hold her responsible with a stern punishment so that similar things will not happen again,” the presiding judge, Kim Se-yoon, said in the nationally televised sentencing.

Ms. Park’s removal from office — she was replaced as president by the liberal politician Moon Jae-in — represented a huge setback for her once-dominant conservative party. Locked away in jail, she has slowly receded from public discourse. Older conservatives who represent her most ardent supporters are deeply mistrustful of Mr. Moon, a progressive whom they regard as pro-North Korean, but who now enjoys public approval ratings hovering around 70 percent.

Ms. Park’s scandal rekindled longstanding public anger over the extensive ties between the government and family-run conglomerates known as chaebol. The case also led to the arrest of Lee Jae-yong, the de facto head of Samsung.

Last August, Mr. Lee, the vice chairman of the smartphone-maker Samsung Electronics and the third-generation scion of the family that runs the Samsung conglomerate, was sentenced to five years in prison for offering $6.7 million in bribes to Ms. Choi and Ms. Park. He was released from prison in February after an appeals court reduced his sentence, but rulings by the judges on Friday could place him in new legal jeopardy.

The new president, Mr. Moon, has vowed to root out corrupt relationships between politicians and businesses that were at the center of the scandal.

Friday’s sentencing marked an ignominious end to Ms. Park’s career. A daughter of the former military dictator Park Chung-hee, she grew up in South Korea’s presidential Blue House and essentially served as her father’s first lady after her mother was assassinated by a pro-North Korean gunman in 1974. Her father’s 18-year dictatorship ended with his own assassination by his spy chief in 1979. Never married and childless, Ms. Park lived a reclusive life afterward.

Her fortunes changed amid the Asian financial crisis of 1998, when South Koreans, hankering for her father’s charismatic leadership, elected her to the National Assembly. She became a political boss and a conservative icon.

But as president, Ms. Park was accused of being disconnected from the public and of mishandling the aftermath of a 2014 ferry disaster that killed more than 300 people, mostly teenagers. In 2016, the news media began reporting allegations of influence-peddling, igniting the scandal that consumed Ms. Park’s administration and sent huge crowds of demonstrators into the streets of Seoul every weekend for months on end.

Almost all of South Korea’s presidents have seen their reputations tarnished toward the end of their tenure or during their retirement because of corruption scandals involving them, their relatives or aides.