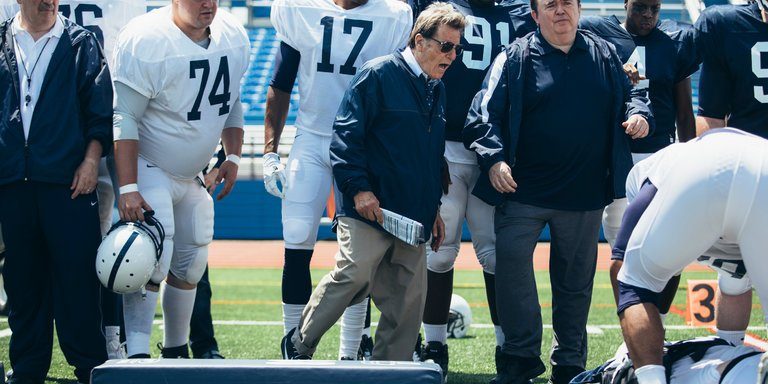 Mr. Scaramucci, it turns out, is a dabbler in the biz.

“I just gave them the dough,” he said during a brief telephone conversation the other day.

Officially, he is a co-executive producer of “Paterno,” having bought the rights to a book about the saga at Pennsylvania State University several years ago with a producing partner, Edward R. Pressman. His involvement with the movie, which will air on Saturday, is not widely known, although Mr. Scaramucci recently tweeted a link to its trailer. His post said: “5 years in the making. Outstanding Film on human nature and our flaws.”

The Mooch, as he is known, spent 11 days in the Trump White House, before an expletive-filled tirade to a New Yorker reporter prompted his ouster. These days, he makes the cable news rounds, gamely sparring with hosts like CNN’s Chris Cuomo, and he appeared with his wife on “The View” to discuss their recent reconciliation.

“I like Anthony,” Mr. Pressman, a veteran film producer, said in an interview. “I consider him a friend. And I know he’s gone through a lot. From my perspective, he’s a good man. I’m not a big Trump booster. His interest is purely artistic and business, and politics was not part of our process.”

At the “Paterno” premiere on Monday, boldface names like Allison Janney and Jeffrey Wright joined a wolfish-looking Mr. Pacino for a reception at Porter House in Manhattan, where the three-course dinner featured filet mignon and a football-size slice of coconut cake.

Absent from the festivities was Mr. Scaramucci. HBO, the home of liberal darlings like Bill Maher and John Oliver, did not confirm whether or not the Mooch had been asked to attend.

“Anthony Scaramucci has a co-executive producer credit on ‘Paterno’ based on early financing he brought to the project prior to HBO’s involvement,” a network spokesman wrote by email.

Mr. Scaramucci said Mr. Pressman had invited him to the premiere, but “unfortunately, I had a prior engagement in L.A.”

“Paterno” is not the first entry on Mr. Scaramucci’s cinematic resume.

He was the executive producer of “Big Words,” a 2013 film about a group of failed rappers in Brooklyn set on the eve of Barack Obama’s election. He co-produced “The Inevitable Defeat of Mister & Pete,” also from 2013 and also about a group of African-American friends in Brooklyn.

He met Mr. Pressman during the filming of “Wall Street: Money Never Sleeps,” Oliver Stone’s 2010 sequel to his 1987 film. The sequel included a walk-on role for Mr. Scaramucci, who spent his pre-political life as a financier.

The two men pursued a few projects — at one point negotiating with Jackie Robinson’s widow about a biopic of the baseball star — and eventually zeroed in on Joe Posnanski’s 2012 biography, “Paterno.” (The book was used as source material for the HBO film; the journalist Sara Ganim, who won a Pulitzer Prize for her coverage of the Penn State scandal, was a consultant on the project.)

“He liked the experience of ‘Wall Street,’ and he liked the business as a sideline,” Mr. Pressman said.

The Trump administration no longer employs Mr. Scaramucci, but it retains at least one aspiring movie mogul: Steven Mnuchin, the Treasury secretary, who was an executive producer of “Mad Max: Fury Road” and other major pictures and is married to Louise Linton, a producer and occasional actress.

Mr. Scaramucci, who has also invested in a Manhattan restaurant, the Hunt & Fish Club, and the New York Mets, indicated on the phone that Hollywood was unlikely to be his sole focus. Still, he mustered up a bit of the showbiz hard sell.