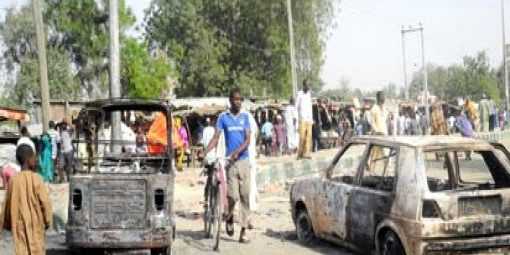 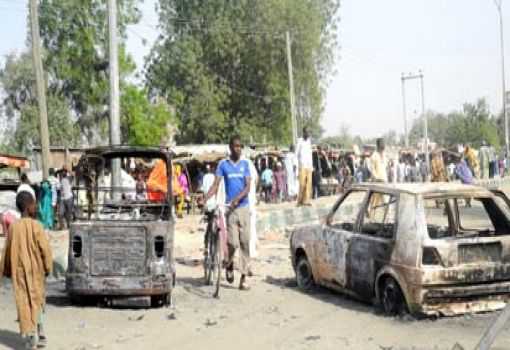 Over 50 people, including 16 members of the Vigilante Youth, a.k.a Civilian JTF, were killed, while about 68 persons were seriously injured when a Peugeot 505 saloon car carrying charcoal but laden with Improvised Explosive Devices (IEDs) exploded around the busy El-Kanemi Round-About, Monday Market and about 40 metres away from the office of the Power Holdings Company of Nigeria (PHCN) in Maiduguri, the Borno State capital, at about 7am today.

Chairman of the Vigilante Youth a.k.a Civilian JTF attached to Sector 3, Mallam Iliya Saidu, while briefing Governor Kashim Shettima, said his men were able to identify nine of his

members that died in the blast. However, Chairman of Monday Market Traders Association, Alhaji Bukar Jere, while giving the breakdown of the number of casualty to the governor when he visited the scene, insisted that 16 Civilian JTF were among the dozens of people killed.

Briefing Governor Shettima at the scene of the blast, the Manager, Maiduguri Monday Market, said “16 civilian JTF were among those killed in the blast, while 69 sustained serious injuries.”

He said four vehicles and four tricycles, popularly called KEKE NAPEP, were burnt in the blast, adding that the incident also affected 49 shops and wares displayed by the petty traders on the road side.