Over 100 Children And Women Buried In Southern Kaduna 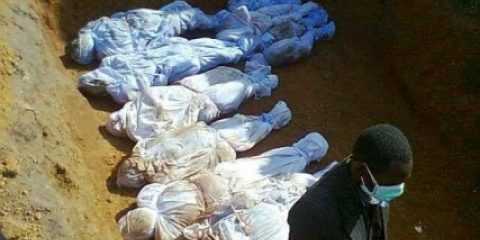 Over 100 persons, mostly children and women, were this afternoon buried in mass grave yards in the troubled Southern Kaduna region of Kaduna state.

They were the victim of a series of gunmen attacks in about five villages in Sanga Local Government area from Tuesday into Wednesday in which the assailants sacked villagers and burnt down their houses.

An indigene of the area, Barrister Sunday Ugah who sent pictures and notes to our New York office, said that many locals are still missing, and that over 300 others were seriously injured. Hundreds more were displaced in some locations.

“We have just finished mass burial of our kith and kin gruesomely killed in our villages by Fulani herdsmen from Tuesday to yesterday (Wednesday),” Ugah said, in evident pain.

He also decried the situation, saying, “I was born about 40 years ago, and I have never seen this kind of ethnic cleansing in my life, we have a family that all their 12 children were mutilated to death. I enclosed their pictures.”