Ouster of South Korean President Could Return Liberals to Power 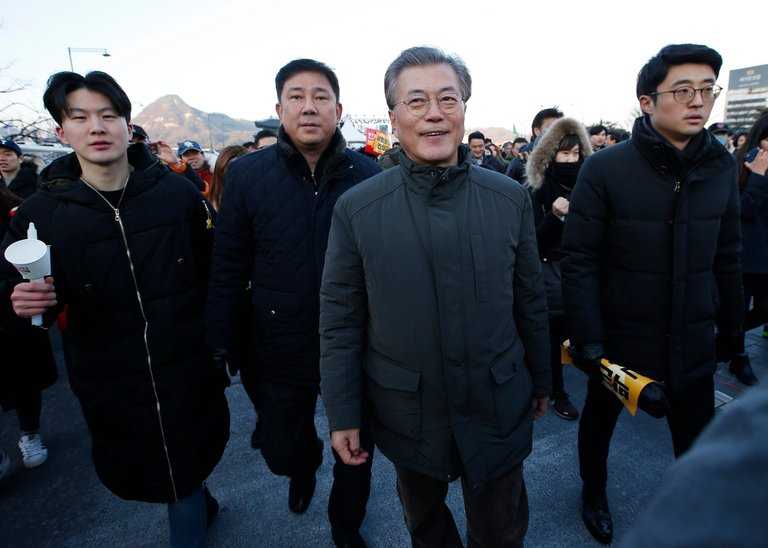 “>North Korea followers and anti-American — an unsettling accusation in a country where the alliance with Washington has been the military bedrock for seven decades.

Now, after being out of power for almost 10 years, the South Korean liberal opposition is on the verge of retaking the presidency with the historic court ruling on Friday that ousted its conservative enemy, President Park Geun-hye, who had been impeached in a corruption scandal.

The liberals’ presidential hopeful, Moon Jae-in, wants a profound change in the country’s tense relations with North Korea, pushing outreach and dialogue. He also is deeply skeptical of the hawkish stance embraced by the conservatives and South Korea’s most important defender, the United States.

Mr. Moon and his liberal partners are especially worried about a new antimissile shield the Americans are installing in South Korea, citing China’s fury over it and warning of a standoff reminiscent of the Cuban Missile Crisis.

SEOUL, South Korea — The foes of South Korea’s likely new leaders have called them blindly naïve, closet North Korea followers and anti-American — an unsettling accusation in a country where the alliance with Washington has been the military bedrock for seven decades.

Now, after being out of power for almost 10 years, the South Korean liberal opposition is on the verge of retaking the presidency with the historic court ruling on Friday that ousted its conservative enemy, President Park Geun-hye, who had been impeached in a corruption scandal.

The liberals’ presidential hopeful, Moon Jae-in, wants a profound change in the country’s tense relations with North Korea, pushing outreach and dialogue. He also is deeply skeptical of the hawkish stance embraced by the conservatives and South Korea’s most important defender, the United States.

Mr. Moon and his liberal partners are especially worried about a new antimissile shield the Americans are installing in South Korea, citing China’s fury over it and warning of a standoff reminiscent of the Cuban Missile Crisis.

Much has changed since South Korea’s liberals were running the country. The North not only has amassed nuclear weapons but claims it can fit them atop missiles. It has successfully launched missiles that could hit Japan, and could soon perfect models that could reach the United States.

North Korea now has an unpredictable 33-year-old leader, Kim Jong-un, who styles himself in the godlike image of his grandfather, the hermetic country’s Communist revolutionary founder. He appears even more obsessed with nuclear weapons than his father and predecessor, Kim Jong-il, and has threatened South Korea and its allies with pre-emptive nuclear attack.

The challenges for Mr. Moon and his liberal partners as they push to reclaim power in elections now scheduled for May will be how to engage with a far more dangerous North Korea, maintain close ties with the United States and repair relations with China, which increasingly mistrusts the American military’s intentions.

Mr. Moon has called himself “America’s friend,” grateful that the United States protected South Korea from communism and supported its economic growth and democratization. The alliance with Washington is “a pillar of our diplomacy,” he said in an interview on the eve of Ms. Park’s court-ordered ouster.

But he also said South Korea should learn to “say ‘No’ to the Americans.”

Mr. Moon’s ascent could seriously complicate the American rush this past week to deploy the new advanced missile-defense system, known as Terminal High Altitude Area Defense, or Thaad, in the South.

He and his liberal associates have questioned the deployment, calling it an unnecessary escalation of tensions on the Korean Peninsula. The missile system would put sophisticated American weaponry on China’s doorstep, and has infuriated the Chinese so much they are boycotting South Korean brands and may now be less willing to use economic leverage to rein in the North.

Ms. Park’s government considered Thaad a centerpiece in defending against the growing North Korean missile threat. But Mr. Moon vowed to review the deployment if elected.

“I cannot understand why there should be such a hurry with this,” he said. “I suspect that they are trying to make it a fait accompli, make it a political issue to be used in the election.”

As of Friday, the Trump administration had said nothing publicly about Ms. Park’s removal and its implications for South Korea’s relations with the United States. But Mr. Trump’s United Nations envoy, Nikki R. Haley, made clear this week that she sees no point in dialogue with North Korea’s leader, whom she described as “not rational,” and that the Thaad deployment was not directed at China.

Mr. Moon said he abhorred “the ruthless dictatorial regime of North Korea.” But he also said sanctions that the United States had enforced with the conservatives in South Korea for a decade had failed to stop North Korea’s nuclear weapons program, so it was time to try something less confrontational.

“We must embrace the North Korean people as part of the Korean nation, and to do that, whether we like it or not, we must recognize Kim Jong-un as their ruler and as our dialogue partner,” Mr. Moon said.

That idea is not entirely new. The last time the liberals were in power, from 1998 to 2008, they pushed the so-called Sunshine Policy of promoting aid and exchanges with North Korea in the hopes of building trust and guiding it toward openness and nuclear disarmament.

The result was an unprecedented détente on the divided Korean Peninsula. But the North persisted in its nuclear weapons pursuits, conducting its first nuclear test in 2006.

It has since conducted four more. It also has demonstrated advances in missile technology that have deeply worried not only the United States but all countries in the region, including China, leading to multiple sets of sanctions by the United Nations Security Council.

Analysts have said that engagement with the North is now riskier, given the United Nations sanctions, and is likely costlier, given how much North Korea’s nuclear stockpile has grown. But Mr. Moon said the strategy pursued by the conservatives was simply not working.

“What have the conservative governments done, except badmouthing the North?” he said. “If necessary, we will have to strengthen sanctions even further, but the goal of sanctions must be to bring North Korea back to the negotiating table.”

The possibility that Mr. Moon could become South Korea’s next president in a few months also comes as the Trump administration is formulating a new policy on North Korea. Ms. Haley said on Tuesday that “we’re considering every option.”

“I hope that Mr. Trump will come to the same conclusion as I did,” Mr. Moon said.

As part of his outreach to the North, Mr. Moon said he would reopen the joint-venture factory complex the two Koreas had run in the North Korean town of Kaesong. After Mr. Kim’s government conducted a nuclear test in January last year, Ms. Park closed the Kaesong venture, saying it violated United Nations sanctions.

Analysts of the conflict said it was premature to assess the outcome of Ms. Park’s removal.

For the past decade, South Korea has been governed by conservative leaders who regard anything less than unequivocal support for the alliance with Washington and the downfall of the Kim Jong-un government as ideologically suspect.

Their liberal adversaries would bring in a new mentality.

Mr. Moon grew up in a family that hated the Communist rule in the North but also had roots there. His parents were among tens of thousands of Korean War refugees on the run from Communists who were evacuated from the North Korean port of Hungnam by retreating American Navy vessels in the winter of 1950.

But Mr. Moon also belonged to the generation of South Koreans who shaped their perspectives by fighting the anti-North Korean, pro-American military dictators, like Park Chung-hee, Ms. Park’s father, who ruled South Korea from 1961 to 1979.

In college in the 1970s, Mr. Moon said he was profoundly influenced by Rhee Young-hee, a dissident journalist who wrote a book criticizing the Vietnam War. The military government, which sent its troops to fight for the Americans in Vietnam, banned the book and arrested the writer.

Some of the old student activists, like Mr. Moon, from the 1970s and ’80s form the mainstay of the political opposition of today.

They do not want their country dragged into what they see as a hegemonic struggle among big powers, while conservatives have no qualms about siding with the United States in its rivalry with China. The Thaad antimissile deployment showcased those opposing perspectives.

As the Americans pushed ahead with the deployment this week in an apparent attempt to embed the system before a new government takes power, China retaliated by forcing South Korean businesses there to close and banning Chinese tourists from visiting the South.

“The United States is pushing us to the West unnecessarily, and China is shoving us to the East unnecessarily,” said Kim Ki-jung, a political scientist at Yonsei University in Seoul and foreign policy adviser for Mr. Moon. “They should not push us too much; part of the Korean DNA is resistance against big powers.”