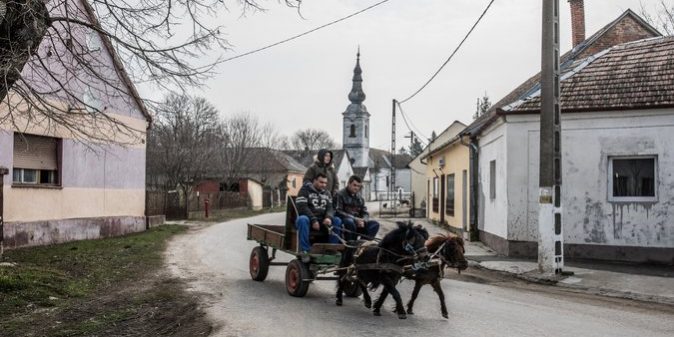 SIKLOSNAGYFALU, Hungary — In seeking re-election, Hungary’s far-right prime minister, Viktor Orban, claims to have conjured an economic miracle since taking office eight years ago. One village shows he is right — and wrong.

After winning power in 2010, Mr. Orban implemented a vast workfare program in which menial tasks have been given to hundreds of thousands of jobseekers — including 73 of the 472 residents of Siklosnagyfalu, a village near the southern border.

As a result, there are roughly half as many jobseekers in the village as there were before Mr. Orban took office. (Over the same period, the national unemployment rate has fallen to 3.8 percent from 11.4 percent.)

But the woolly nature of the jobs program in Siklosnagyfalu and hundreds of similar towns has left critics asking whether all is really as it seems — and whether workfare participants are really working.

In the summer, program participants in Siklosnagyfalu are kept busy, said Gyongyi Orgyan, who takes part in a farming project.

But in winter, “there really isn’t that much work,” said Ms. Orgyan, 56. “There are days when we don’t do anything.”

Mr. Orban has relentlessly transformed Hungary’s political system and remade the country's institutions and society — efforts that have been roundly condemned by democracy advocates. But the prime minister’s allies say that Hungarians really care about his successful stewardship of the economy and that “Orbanomics” will most likely decide the election on Sunday.

“People feel that they have a much better life in terms of the economy,” said Istvan Lovas, a radio host and one of Mr. Orban’s most prominent supporters. “Whatever figures you look at, they are clearly improving.”

In many cases, that is true. Government debt, as a proportion of Hungary’s gross domestic product, has fallen more than 6 percent since 2010. The country’s credit ratings have improved. The budget deficit has roughly halved. Growth has almost quadrupled. Wages have risen by more than 10 percent. Though still high, deprivation has fallen by nearly half — not least in places like Siklosnagyfalu, where villagers benefit from their workfare wages. Officially, unemployment has dropped by nearly two-thirds.

“Hungary has been on the right track,” Mihaly Varga, the economy minister, said in an email that cited most of these positive developments. “Now everyone who is capable of work and wants to work can find a job.”

But critics argue that things are not as rosy as the traditional macroeconomic measures suggest.

Since Mr. Orban came to power, Hungary has slipped to 29th place from 20th on the Euro Health Consumer Index, a comparison of European health systems. Student performance in reading, math and science has worsened, according to the Program for International Student Assessment, which compares global education systems.

And as other Central European countries have become less corrupt, Hungary has become significantly more so, according to the World Bank’s Worldwide Governance Indicators. During Mr. Orban’s first six years in power, five of his closest friends were awarded roughly 5 percent of public procurement contracts, a total of $2.5 billion, according to an analysis by the Corruption Research Center Budapest.

Mr. Orban’s successes have also partly been the result of factors beyond his control.

Under Mr. Orban, gross domestic product has been unusually dependent on money from the European Union. Between 2009 and 2016, such funding constituted nearly 4 percent of Hungarian G.D.P. per year, one of the highest ratios in the bloc, European officials have calculated.

Europe also functions as a pressure valve for the Hungarian labor market. The government says 730,000 new jobs have been created since 2010 — but that includes roughly 350,000 Hungarians who have found work elsewhere in the European Union, said Janos Kollo, research director of the Institute of Economics at the Hungarian Academy of Sciences.

Mr. Orban has also benefited from the global economic revival.

Some of those measures raised eyebrows. Until Mr. Orban and his far-right party, Fidesz, came to power, Hungarians could hold 25 percent of their retirement savings in a private fund; the rest went into a public pot. To cut state debt, the government announced that Hungarians who did not transfer private pension assets into the public system would not receive a state pension. By the time the order was ruled unconstitutional, most people had already complied.

“It was a completely unlawful blackmailing of the population,” said Balazs Romhanyi, an economic analyst who at the time was chief of staff at the Hungarian Budget Council, a state body that monitors state expenditure.

(Mr. Varga, the economy minister, justified the decision by arguing that the private pensions were “too costly,” and that the new system had would be more “stable and predictable.”)

The highlight of Mr. Orban’s apparent economic success — the fall in unemployment — also fades under scrutiny.

In 2017, more than 200,000 Hungarians — nearly 4 percent of the country’s work force — participated in the government’s workfare program, and were therefore counted as employed.

But labor economists questioned their inclusion, since many were doing work that did not really need to be done. In Siklosnagyfalu, for example, 25 workfare participants are allocated to work all year on five hectares, or about 12 acres, of public farmland — work that requires neither that many people, nor such a permanent assignment.

“In really small settlements, there are no real jobs,” said Gyorgy Molnar, a specialist in workfare at the Institute for Economics at the Hungarian Academy of Science. “The majority of people are working for one or two hours and then going home.”

He estimated that the real unemployment rate in 2017 was 7.3 percent — lower than when Mr. Orban entered office, but far higher than the official rate of 4.2 percent.

The program also makes participants more dependent on both on their local mayor, who decides work assignments, and on Fidesz, the party that expanded workfare.

In the last general election in 2014, Fidesz received 116 votes in Siklosnagyfalu and the runner-up nine. That result is likely to be repeated on Sunday, said the village’s independent mayor, Jozsef Kosztics, who said he had talked with villagers about how they planned to vote.

Though the workfare program may skew national employment figures and exacerbate feudal dynamics in the countryside, it has nevertheless improved lives in Siklosnagyfalu.

Participants are paid approximately $175 a month — less than half the minimum wage, but roughly double what was paid out in unemployment benefits. Four Siklosnagyfalu residents said they could now afford to pay for heating in the winter and to buy meat more regularly.

“This little bit of money goes a long way in this village,” said Eva Petrovics, 60, who helps to clean the village nursery school. “The fridge is full now.”

The program has also helped to spruce up the village. Since 2012, workfare participants have built a small bridge, added a drainage system, and renovated the town hall and sports fields. The terms of the program have also allowed Mr. Kosztics to buy farming machinery for the village, including a new tractor and plow.

“You can say a lot of things about the workfare program, but one thing is certain,” Mr. Kosztics said. “For municipalities like this one, it means survival.”