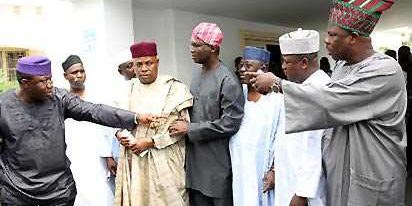 ABUJA — Opposition governors, yesterday, accused the Federal Government of deliberately manipulating the Federation Account to give the impression that there were inadequate funds to share despite steady oil prices since the beginning of the year.

The governors, who met in Abuja under the Progressive Governors’ Forum, PGF, also condemned the Federal Government for illegal deductions from states’ funds.

Besides, the All Progressive Congress, APC, governors frowned at what they called ‘flagrant disregard by the Federal Government of the Constitution and the Appropriation Act with regards to collection and sharing of government revenue and implementation of budgets.

The governors wondered why the President Goodluck Jonathan’s administration had been consistently unable to implement budget provisions, which it willingly formulated and passed into law by the National Assembly.

In a communiqué, the governors vowed to take appropriate legal actions to compel the Federal Government to respect the constitutional rights of states and comply fully with the Appropriation Act.

“We wish to say that there is no justification for the continuous dwindling revenue collections into the Federation Account given that the price of crude oil, being the main revenue earner, has been relatively stable and above $100 per barrel since the beginning of 2013.

“Forum excoriates the Federal Government’s consistent flagrant disregard for the Constitution and the Appropriation Act as passed by the National Assembly.

“In fact, we wonder why the Jonathan’s administration is unable to implement the budget provisions, which it willingly formulated and which the National Assembly passed into law,” the governors noted.

Turning to the political turf, the governors dismissed the just-concluded Delta Central Senatorial by-election, which was won by the PDP, as a charade and vowed to challenge it in court.

According to them, the outcome of the election rubbishes Jonathan’s avowed pronouncement to promote credible, free and fair elections.

They expressed concern at the Independent National Electoral Commission’s weakness to conduct free and fair elections despite huge funds that had been channelled to the commission by the government.

The governors said they were watching how INEC and other supporting federal agencies would ensure that the forthcoming governorship election in Anambra is free and fair.

They noted, “In the face of the sham in Delta, forum’s confidence in INEC is shaky unless urgent measures are set in motion to ensure that Anambra Governorship election is credible and transparent.

“In same vein, forum calls on INEC to immediately set machinery in motion for the conclusion of the Oguta State Assembly election, as it is inconceivable that INEC cannot successfully conduct election in five polling booths.”

“Finally, the forum urges Nigerians to remain steadfast in the face of desperate socio-economic circumstances and intimidating security challenges as it assures that it will remain committed to take all necessary initiatives to provide life more abundant for all. Forum calls for continuous support from all good people of Nigeria,” the governors stated.

The communiqué was jointly signed by the governors of Ekiti, who hosted the meeting, Imo, Osun, Oyo, Yobe and Borno, who was represented by his deputy.