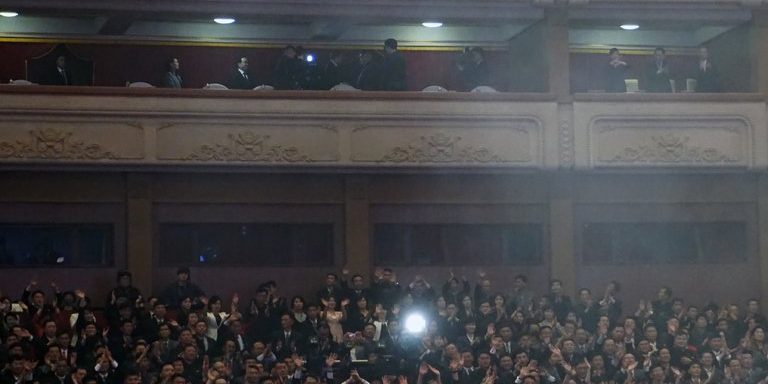 SEOUL, South Korea — He clapped and he smiled, even posing for a group photo with a K-pop band.

The appearance by North Korea’s leader, Kim Jong-un, on Sunday at a concert by South Korean musicians in Pyongyang was all the more unusual because his authoritarian government has been struggling to stave off what it sees as an infiltration of the South’s pop culture among his isolated people.

But Mr. Kim shook the hands of members of South Korea’s most popular girl band, Red Velvet, which he and his wife, Ri Sol-ju, watched from a balcony.

The two-hour show at the East Pyongyang Grand Theater was part of a political détente between the neighboring countries as relations have thawed.

It was the first time a North Korean leader watched a South Korean musical performance in the North’s capital.

The performances by the South Korean troupe that flew in on Saturday with great fanfare to Pyongyang were done in the name of international diplomacy.

The show occurred just weeks before Mr. Kim is scheduled to meet with South Korea’s president, Moon Jae-in, at a border village on April 27, and ahead of a planned summit meeting with President Trump in May.

Mr. Kim and Ms. Ri, a former singer, were among hundreds of North Koreans who filled the 1,500-seat theater to watch the South Korean singers, including older crooners, gelled rockers and K-pop starlets.

On Sunday evening, thunderous clapping erupted when Mr. Kim and his wife entered the concert hall and seated themselves in a second-floor balcony, according to pool reports from South Korean journalists and officials.

Attention was focused on how Mr. Kim would react to the pop singers, particularly Red Velvet. The five-member girl group is typical of South Korean girl groups — known for their chirpy, bubble-gum harmonies and sexy choreography.

Their tunes are so infectious that the South Korean military has broadcast them across the border in a psychological war against North Korean soldiers. The North used to threaten to direct its artillery at the loudspeakers, warning of an “all-out war” if the South didn’t turn them off.

How things have changed.

South Korean officials said the North did not attempt to reject any of the South Korean song lineup or change the pop stars’ lyrics or risqué dance moves.

(But apparently, even North Korea had a limit to how far it would go in accepting K-pop. South Korean officials said the North had rejected their suggestion that the global star Psy, the singer famous for his “Gangnam Style” global hit, be included in the visit.)

“Please tell President Moon how good this kind of exchange is. I know there has been attention to whether I will come and see Red Velvet,” Mr. Kim was quoted as telling South Korean officials. “I thank you for bringing this gift to Pyongyang citizens.”

Kim Yerim, a Red Velvet member who is known as Yeri, was quoted as saying, “The audience clapped loudly and even sang along.”

The South Korean culture minister, Do Jong-hwan, told reporters in Pyongyang after the show that Mr. Kim “showed much interest during the show and asked questions about the songs and lyrics.”

Mr. Kim’s acceptance of Red Velvet and South Korean pop culture was striking because his government has stepped up a crackdown on DVDs and computer thumb drives containing South Korean pop songs, movies and TV dramas smuggled from China, calling for establishing “mosquito nets” to keep out “decadent capitalist influence.”

Defectors from the North have said that those who were caught selling or watching South Korean K-pop music videos could be sent to prison camps.

Mr. Kim, who studied in Switzerland as a teenager, has tried of late to present himself as more flexible, at least among the loyal elite citizens living in Pyongyang. North Korea’s Moranbong Band, often said to be Mr. Kim’s favorite girl group, has performed in short skirts and high heels, featuring theme songs from Hollywood films.

Though it was Mr. Kim’s first known K-pop experience, his father, Kim Jong-il, watched a South Korean female singer perform in a provincial town in North Korea in 2001.

The younger Mr. Kim’s appearance was part of a breakthrough after a tense international standoff spurred by Mr. Kim’s nuclear ambitions and his missile tests, prompting the international community to slap ever more punishing economic sanctions on his isolated country.

In the past week, Mr. Kim traveled by train to pay a stealth visit to President Xi Jinping of China in Beijing.

Other gestures from the North to foster the détente have included sending athletes, cheerleaders and an art troupe to the South during the Winter Games in February. Athletes from North and South Korea also marched under a unified peninsula flag at the opening ceremony.

The South Korean singers now in the North will hold a joint concert with North Korean performers on Tuesday at an indoor stadium in Pyongyang.

South Koreans will see a recorded version of the concert later this week, according to local news media. It’s unclear if, or when, ordinary North Koreans will be allowed to see it.