Only The ECOWAS Court Can Give Us Justice,” – Ifeanyi Ejiofor 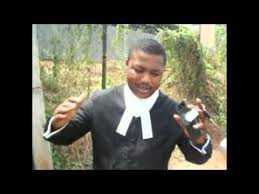 The embattled leader of the Indigenous People of Biafra, IPOB, Nnamdi Kanu, has accused President Muhammadu Buhari, of being unfair to him and influencing the decisions of the court in his ongoing trial.

Kanu, who made this allegation through his lawyer, Ifeanyi Ejiofor, at a media briefing in Abuja on Wednesday, May 11, said Buhari had indirectly asked the court to convict him for treasonable felony through his previous statements.

Ejiofor stressed that the president’s “pronouncement” on issues regarding Biafra and Kanu was prejudicial and that they were capable of forcing the hands of the court to convict his client.

Buhari had in his maiden Presidential media chat said even with two international passports, one for Britain and the other for Nigeria, Kanu, “did not use any of them to come into the country,” adding that the pro-Biafra leader smuggled in equipment into the country just to preach hate messages.”

“And the one you are calling Kanu, do you know he had two passports – one Nigerian, one British – and he came into the country without any? Do you know he brought equipment into this country and was broadcasting Radio Biafra? Which kind of government do you think should harbour that kind of person?

“There is a treasonable felony suit against him and I hope the court will listen to the case.” He added.

Related: Why Dasuki, Kanu must remain in prison – Buhari

The counsel, therefore, opined that Buhari was inadvertently compelling the court to do his bidding.

His words, “Nnamdi Kanu is a political prisoner, and this was confirmed in the presidential media chat,” he said.

“The president should not be making pronouncements that are indirectly influencing the decision of the judges.”

Ejiofor added that he had filed a fundamental rights suit against the federal government at the ECOWAS court on the imprisonment of Kanu.

“We went to ECOWAS court because we believe we will be given justice. Only ECOWAS court can give us justice,” he said.

Meanwhile, Kanu, who is also the Director of Radio Biafra and Television, has been in detention since October 14, 2015, when he was arrested by men of the Department of State Security, DSS, upon his arrival to Nigeria from his base in the United Kingdom.

He is currently facing a six-count treason charge and has pleaded not guilty to the charge, even as the court ordered his remand at Kuje prison.