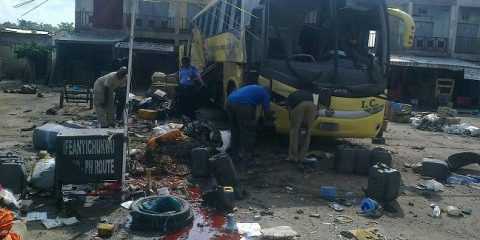 An unidentified woman was killed, while eight other persons sustained severe injuries, when a high calibre improvised explosive device, concealed in a refrigerator went off at the New Road motor park in Sabon Gari area of Kano metropolis.
The incident which occurred around 3p.m., triggered panic in the commercial city of nine million residents.

New Road motor park was also the scene of the deadly blasts last year, during which no fewer than 70 lives were lost, when luxury buses were targeted.

An eyewitness confided in Vanguard that the suspected refrigerator was moved into the park by a truck pusher, after passing through security check points mounted by security agents and the park management.

The source added hat the IED went off soon after it was loaded into a vehicle. He said the impact severed the head of an unidentified woman with eight other persons injured .

Briefing newsmen at the scene of the blast, Kano State Commissioner of Police, Mr. Adelenre Shinaba, confirmed that “a woman lost her life in the blast, while eight others who were injured have been taken to hospital.”

He said that the explosive which was concealed in a refrigerator was smuggled into the pack by a truck pusher, adding: “It went off at the point of loading it on a stationary vehicle.”

He urged the city dwellers to go about their legitimate businesses without fear of molestation, adding that proactive measures had been put in place to ensure adequate protection of lives and property.

Shinaba enjoined the citizens to be extra vigilant and report suspicious movements to relevant authorities.

Kano is, however, calm after the blast as residents besieged the adjourning Sabon Gari market for Sallah shopping.