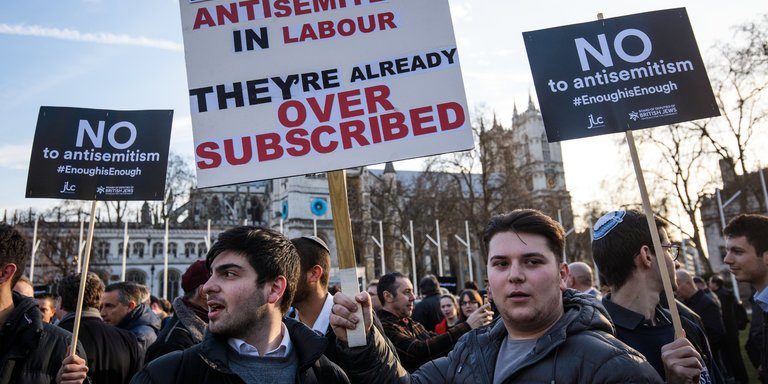 LONDON — The mural emblazoned on a wall in east London has long been painted over, but the image remains jarring: a group of caricatured, stereotypically Jewish bankers playing Monopoly on the backs of the poor.

So when it appeared in the Twitter feed of a British lawmaker — along with a question about why the leader of her opposition Labour party, Jeremy Corbyn, once opposed its removal — Luciana Berger wanted answers.

For hours, she heard nothing from Mr. Corbyn and, when a response finally came, it was hardly unequivocal. Conceding, through an aide, that the mural he endorsed via Facebook in 2012 was anti-Semitic, Mr. Corbyn expressed “sincere regret” for not having looked more closely. But he also suggested that he had been defending free speech.

Ms. Berger was not impressed.

By the time a clearer apology emerged, along with a letter to Jewish organizations, it was too late for many critics. On Monday, demonstrators gathered for an extraordinary protest outside Parliament, one intended to make the striking point that Labour — once considered a natural political home of Britain’s Jewish community — had become a place where some felt under siege.

While hostility to Jews is often associated with right-wing politics, under the Labour Party’s most left-wing leader in recent history, anti-Semitism is now “more conspicuous, more commonplace and more corrosive” than at any time she can remember, according to Ms. Berger, who is the parliamentary chairwoman of the Jewish Labour Movement.

Other Labour lawmakers seemed worried, too.

The crisis deepened with news on Thursday of the resignation of Christine Shawcroft, the chair of Labour’s internal disputes panel, after the leak of an email suggesting that she had lent support to a council candidate suspended after accusations of anti-Semitism.

Coming after criticism of Mr. Corbyn’s reluctance to blame Moscow for the poisoning attack on a Russian former spy and his daughter in Salisbury, England, the issue has recharged a bitter argument about his leadership. That, in turn, has led Mr. Corbyn’s supporters to complain of a politically motivated plot to destabilize his position because of his left-wing politics.

But there is little doubt that the atmosphere in the Labour Party has changed. A veteran of left-wing struggles, Mr. Corbyn learned his politics fighting apartheid in South Africa and campaigning against what he saw as Western militarism and neo-imperialism. While many of those battles have been won, the plight of the Palestinians remains a sore point on the left, one deepened by the hard-line policies of the Israeli prime minister, Benjamin Netanyahu.

At the same time, the Labour Party’s membership has grown bigger and more diverse, while Momentum, a campaign that promotes Mr. Corbyn’s radical brand of politics, has emerged as a powerful force, tilting the political balance further to the left.

This is not the first time that Mr. Corbyn’s party has faced allegations of anti-Semitism. In 2016, one lawmaker, Naz Shah, was temporarily suspended for sharing a graphic showing an outline of Israel superimposed on a map of the United States, suggesting the relocation of Israel to North America.

When the former mayor of London, Ken Livingstone — a longstanding ally of Mr. Corbyn — tried to defend Ms. Shah, he instead poured gasoline on the flames by arguing that, in 1932, Adolf Hitler “was supporting Zionism before he went mad and ended up killing six million Jews.”

After that crisis, Mr. Corbyn commissioned an inquiry, led by Shami Chakrabarti, a leading human rights campaigner, which concluded that Labour was not overrun by anti-Semitism but acknowledged that there was an “occasionally toxic atmosphere” in the party.

The mere fact that the party was having such a discussion would have been all but unthinkable in days past.

“Labour has a very strong tradition of support for Zionism and Israel,” said June Edmunds, a lecturer in sociology at the University of Sussex. That, she added, was “based on the formative impact of the genocide of the Jews on the postwar generation as well as the view that Jewish nationalism represented a form of anti-colonialism.”

Opinion began shifting after the Arab-Israeli War in 1967, though it was the Sabra and Shatila massacre in 1982 that generated sharper criticism of Israel alongside growing sympathy for Palestinian refugees in Lebanon, Ms. Edmunds said. Events in Gaza and Israeli settlement policy have only added to those feelings.

Criticism of Israeli policy is, of course, not the same thing as anti-Semitism, though, as Ms. Edmunds put it, “there can be overlaps — within Labour and other parties — between anti-Zionism and anti-Semitism.”

And anti-Semitism in wider society has deep roots, as the archbishop of Canterbury, Justin Welby, acknowledged in evidence to a parliamentary select committee inquiry into the issue.

“We had a shameful record until very recently, in historical terms,” he said, “England was the first European country to expel Jewish people, in 1290, with their exile lasting for 350 years.”

Nowadays, the insidious anti-Semitism of the British establishment has given way to something more overt. Reported anti-Semitic incidents in Britain have increased, the select committee report noted, accelerated by social media. Ms. Berger has released a snapshot of some of the abuse she has received, including Twitter posts likening her to a pig and calling for her head to be put on a spike. One read, “waking up and remembering you’re a Jew must be a horrid start to one’s day.”

Nevertheless, the majority of anti-Semitic abuse and crime “has historically been, and continues to be, committed by individuals associated with (or motivated by) far right-wing parties and political activity,” the report said.

The Labour Party’s problems with anti-Semitism have become intertwined with the personality and leadership of Mr. Corbyn, who spent three decades on the fringes of politics, opposing NATO and Western foreign policy, while championing anti-imperialist and anti-Zionist causes.

In 2015, when he was elected leader, concerns were raised about Mr. Corbyn’s earlier reference to Hamas and Hezbollah as his “friends.”

“As a maverick backbencher, it wasn’t a problem to welcome Hamas or Hezbollah,” said Mark Wickham-Jones, a professor of political science at the University of Bristol. “But as leader, he’s supposed to have a more multilayered series of relationships, and the past comes back to haunt him.”

Donald Macintyre, a political commentator and author of “Gaza, Preparing for Dawn,” said that, by failing to deal with the anti-Semitism issue, Mr. Corbyn “weakens the credibility of wholly legitimate criticisms of Israeli occupation and settlements.”

Social media posts from the days when fewer people took notice of what Mr. Corbyn thought have resurfaced showing him to have been a member of several Facebook groups in which members had shared anti-Semitic comments and images.

Mr. Corbyn’s defense in 2012 of the mural by the Los Angeles-based street artist Mear One, whose real name is Kalen Ockerman, was first reported in 2015 by the London-based publication Jewish Chronicle, which failed to get any response from the Labour leader’s office, according to the paper’s editor, Stephen Pollard. Though the story went nowhere, it was remembered by the Jewish community, Mr. Pollard said, adding that “Corbyn’s first statement about freedom of speech genuinely shocked people.”

Other Corbyn controversies have often involved Israeli policy, on which there are different opinions in the Jewish community. But, Mr. Pollard said, “This mural was classic old fashioned anti-Semitism, nothing to do with Israel at all.”

Mr. Pollard said he thought that Mr. Corbyn was indifferent to anti-Semitism, and “doesn’t see it as ‘proper racism’ because most Jews are ‘part of the ruling elite.’ ”

But Sue Lukes, a member of the pro-Corbyn Jewish Voice for Labour group, said that she knows the Labour leader from their activities in North London politics and that she could vouch for him. “Do I think he’s an anti-Semite? Absolutely not,” she said, describing his Facebook comment on the mural as a “genuine mistake he was happy to admit to.”

Ms. Lukes and other Corbyn supporters say they detect a plot by internal enemies to undermine a charismatic, left-wing leader.

“The timing is not coincidental; there has been a lot of talk about what the people who oppose Jeremy Corbyn are likely to do next,” she said, adding that they “may be thinking that it is quite a neat way to stir things up a bit.”

Ms. Luke, whose grandparents died at Auschwitz, said she believed that Labour needed to deal better with complaints of anti-Semitism, adding that the digital era had brought new people into political activism, some of whom were susceptible to internet conspiracy theories.

But she said she still saw the protest against Mr. Corbyn as politically motivated. “Faith and community leaders should not be interfering to unseat the leader of a political party, or skew the outcome of the elections,” she said, suggesting an intention to damage Labour’s standing in coming local elections and to increase pressure on Mr. Corbyn’s leadership.

Stewart Wood, a member of the House of Lords and former aide to the previous Labour leader, Ed Miliband, agreed that Mr. Corbyn was not anti-Semitic — indeed, for such a committed anti-racist it is “a horrific accusation,” he said — but he acknowledged that “a few elements inside the left of our party have drifted into it in the past few years.”

Under the Labour former prime minister, Tony Blair, Mr. Corbyn and his allies felt themselves outcasts in the party, and “the culture of the tribe of outsiders is to support each other, instinctively,” Mr. Wood said.

“But,” Mr. Wood added, “now that he is leader, the admirable instinct to support people who were with him in the tough times as an outsider can sometimes end up hurting his leadership by giving the impression that he is prepared to tolerate the intolerable.”