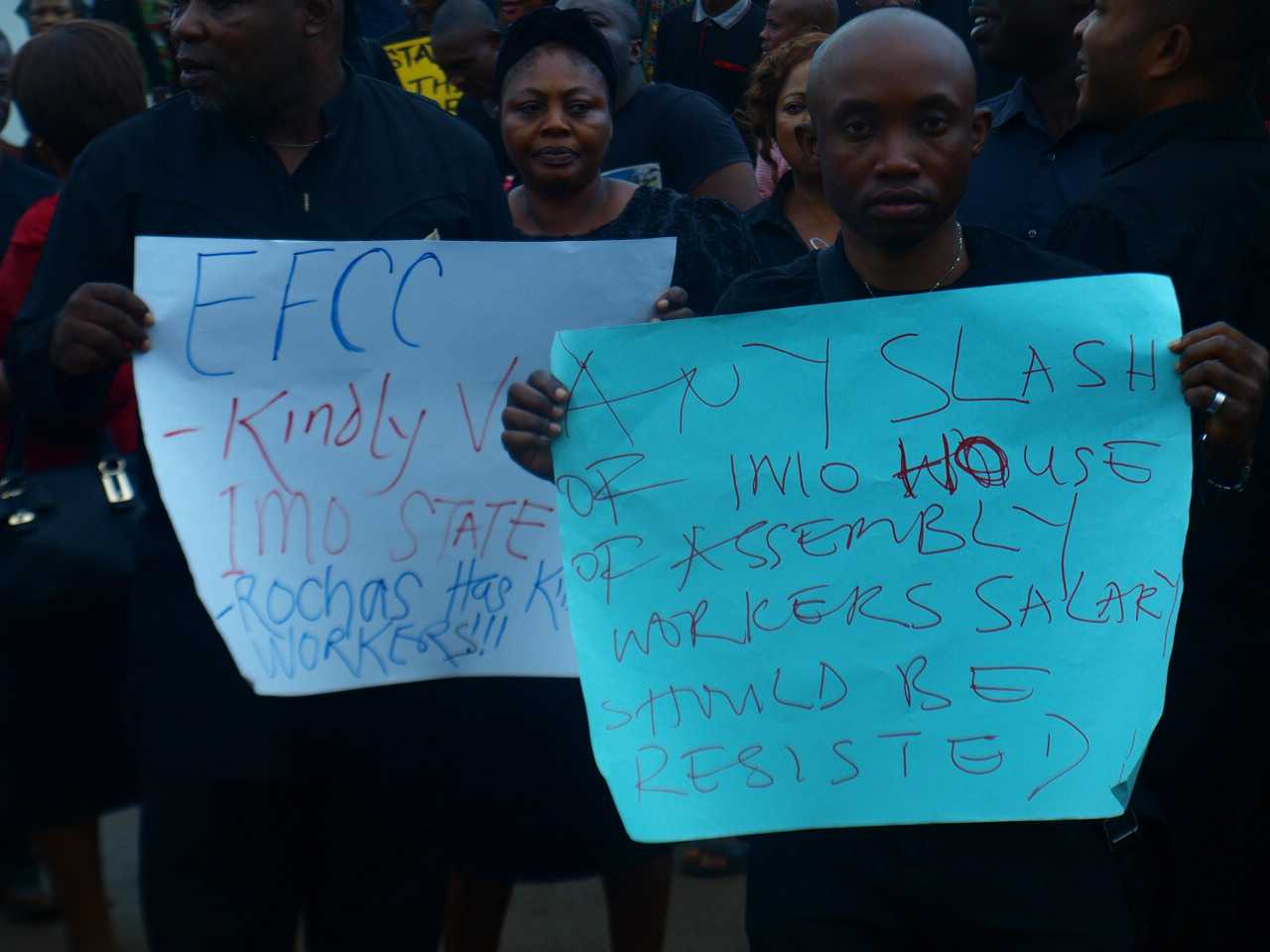 A protest by factions of the Ada­palm Landlords Association (ADPLA) at the entrance of the Imo State Government House Thursday turned bloody as two members involved in it were feared dead after being hit by a fast-moving vehicle while trying to escape a chase by the police who dispersed the protesters.

Scores of the protesters were injured while fleeing from hundreds of police officers who chased them away from the scene. The police team was supervised by the state police commissioner himself, Mr. Taiwo Lakanu.

Two factions of ADPLA had stormed the Government House, Owerri at 9 am, one to protest and the other to support the company, endorsed by the Okorocha administration to manage the state palm produce firm.

While a faction of the protesters demanded the resumption of ROCHE after the workers downed tools at the palm company, the other called for their sack, accusing the company of not employing its youths.

In the midst of their commotion, the state police commissioner whose office is close to the scene came with his men to disperse the protesters.

After pleading with the protesters to leave, Lakanu ordered his men to arrest all the protesters; tear gas canisters were shot at them.

In the ensuing melee, some of the protesters jumped the fence of the building and were injured in the process while others who ran into hotels and restaurants in the area to evade arrest were caught and beaten up by the police.

The two victims hit by the fast-moving vehicle whose identity could not be ascertained were said to have been taken to a nearby hospital where they allegedly died.

When contacted, the State Command Police Public Relation Officer, Andrew Enwerem, denied that any protest by the people of Ohaji/Egbema took place in the state.

“If there was any protest I am not aware if police were chasing them and they fall, did they say it was the police that hit them?” he asked.

Meanwhile, two people have been feared killed in the raging crisis in Obi Local Government Area of Nasarawa State between the Gwandara and the Eggon ethnic groups.

A resident disclosed Thursday morning that the situation which was quelled by the men of the Lafia Police Division had escalated.

The latest crisis took place in Dadere, a settlement of the Gwandaras.

An eyewitness said that the corpses of the two people who were killed had been deposited at the Dalhatu Araf Specialist Hospital, Lafia, the Nasarawa State capital.