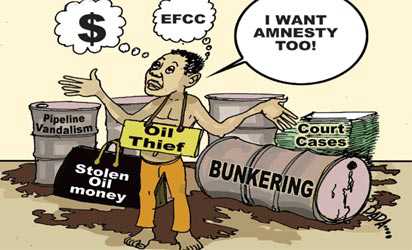 Nigeria’s economy may be heading for trouble, as oil price crashed even lower at the weekend, thereby threatening the 2015 budget and fiscal plan. The international price of crude hit a six-year low below USD40 per barrel with West Texas Intermediate crude oil futures as low as USD39.89, while Brent crude declined further to USD45.10 from previous week’s level of USD48.87 per barrel. Nigeria’s sweet crude is similar to the Brent. It is envisaged that prices will crash even further once Iran begins to enyoy its international pardon by pumping more oil into the already saturated market. This will spell more doom for Nigeria, which is producing less than its projected 2 million barrels daily, thereby increasing the cash crunch and liquidity flow in the economy, with many states still unable to pay salaries.

The steep decline in oil prices had in March this year forced the National Assembly to settle for USD53 per barrel as the oil benchmark price for 2015 budget, down from USD65 earlier proposed by the Federal Executive Council under ex-president Goodluck Jonathan. The government had earlier in the year effected downward review of the budget benchmark twice in response to sliding oil price from USD78 to USD73 and later to USD65. It even said it had planned for possible price fall scenarios of up to $50/barrel. With this development, economists are expecting further downwards adjustments in the budgetary benchmark, revenue projections and ultimately expenditure provisions. Also, they expect further pressure on the value of Naira as the development has wiped off any accretion to the country’s Excess Crude Account. According to the Global Chief Economist, Renaissance Capital, Mr. Charles Robertson, lower oil price will be painful for the budget. It means less money is available for much-needed investment in infrastructure.

Budget projections of the 2015 budget had envisaged federal government’s share to be about N3.6 trillion of total oil component revenue at USD65 per barrel, with estimated production output of 2million barrels per day.

At current oil price, the component accruable to the federal government would drop massively to less than N2.5 trillion, putting the entire budget in disarray. Evidently all the projected expenditure, it was learnt, are already being curtailed in the recurrent expenditure provisions in the budget, while capital expenditure of N634 billion is completely dropped. An economist with the Central Bank of Nigeria (CBN) told us that federal government may have abandoned the 2015 budget entirely and is now focusing on ordering the economy for 2016 budget and fiscal policy. He added, however, that in the interim, the apex bank would be battling with the external reserves and exchange rate pressures as a result of this development in the international oil market. Analysing the current pressures on CBN over the external reserves and plunging oil revenue, economists at FSDH Merchant Bank, said: “Although the CBN may keep to its current exchange rate position, we believe that with the huge demand pressure in the foreign exchange market in the face of the declining oil price and unsold oil production, we are inclined to maintain our forecast exchange rates,” which is about N216/ USD1.00 in the official CBN window by next month.

The oil revenue situation appears more compounded as Nigeria’s ability to produce and availability of buyers have been on the negative since this year. According to OPEC, the Nigerian National Petroleum Corporation (NNPC) cut its July official selling price for Bonny light and Qua Ibo to 10-year lows relative to North Sea Brent, as an overhang of 15mb July cargoes were unsold. The OPEC added that loading delays also hurt certain Nigerian grades as refiners looked for more reliable alternatives.

Moreover, West African crudes were undermined by excess supply and relatively high freight rates for their cargoes making cheap North Sea and Mediterranean grades more attractive to some European buyers. The Managing Director, International Energy Services, Dr. Diran Fawibe, noted that the US market and parts of Europe are no longer Nigeria’s prime markets since the advent of the Shale oil, while the Arab producers have a better comparative advantage over Nigeria because of their nearness to the market. He noted that what is happening at the international oil market is beyond government’s control, which is further exacerbated by the refusal of the Organisation of the Petroleum Exporting Countries, OPEC, to which Nigeria also belongs, to cut down its production quota. OPEC is unwilling to cut back production as it would have done in the past to shore up prices because of shale oil, thus resulting to the current glut in the market and continuous price falls. Agreeing that Iran’s entry has again changed the market dynamic, the Chief Executive Officer, Oildata Energy Group, Mr. Emeka Ene, said offering discounts will compound Nigeria’s problems, since it is a mono-product oil economy. Instead, he urged government to initiate longer term strategies such as the formation of alliances with other producer nations, like Venezuela. He said: “We (Nigeria) need to think out of the box, and if we plan well, we can blend Nigeria’s light crude with Venezuela’s heavy crude to make it more friendly to the refineries.” According to him, the reason government is finding the price falls very challenging is because oil has over the years been seen as an export commodity, rather than an investment product. “The time to invest in higher field activities is when oil prices are down not when they are high. But we are unable to this because there is no money for such investments,” he added.

The slide toward USD40 per barrel gained momentum earlier last week after the US Energy Information Administration reported a larger-than-expected build in crude inventories previous week. This added to signs that the oil market remains oversupplied, with unequal demand, as the 12-member OPEC continues to pump at an unrelenting pace. The group’s latest monthly report showed that its output surged to a three-year high in July, boosted by Saudi Arabia, Iraq, Angola, and Iran. More Iranian oil is expected on the market with lifting of economic sanctions. Oil is now headed for its longest weekly losing streak since 1986, according to Bloomberg.

Oil is in a bear market, and prices are down nearly 35% from recent highs. Friday’s drop comes amid a bigger sell-off in global markets. The major averages are seeing their sharpest weekly loss of the year, and the Dow lost more than 350 points during Friday’s session.