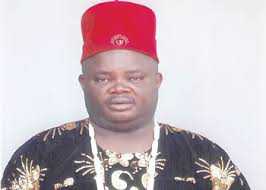 President of the Kano State Chapter of Ohanaeze Ndigbo, Chief Tobias Michael Idika, has alleged that high government officials and security agencies are benefitting from the terrorist acts by members of the Boko Haram in parts of the north and would therefore want the crisis to continue.

Chief Idika, who is also the President-General of leaders of ethnic communities resident in Kano State in an interview with Sunday Vanguard did not spare northern politicians as well as religious leaders and traditional rulers in what he described as blackmail to ensure the violent attacks do not come to an end.

According to him, “the Nigerian government has not shown sincerity in the fight against terrorism. So many people within the government and security agencies want this trend to continue because they are reaping from it. Who are the Boko Harams? Who are their sponsors? The Federal Government has answers to this question, and if they mean it, these killers would be rounded up in a matter of minutes”.

Chief Idika who also blamed the northern leaders for the crisis said, “every right-thinking Nigerian who witnesses the killing of innocent citizens must have reservations. I sense a high level of compromise, connivance and blackmail. Some northern politicians want these killings to continue, using it as a bargain for power. What pains me so much is that they are hiding under the cloak of religion to perpetrate this evil.

“The culprits are politicians, religious leaders and traditional rulers, including me and you because we have failed to properly educate the society, particularly, the youths; rather we use them to perpetrate evil for our own personal aggrandizement. I only pray God will forgive us. As far as I am concerned, Boko Haram is a creation of bitter politics.

“Let me say this without mincing words—if they continue to allow this kind of carnage in Sabon Gari, the resultant consequent will be deadly. Kano state government should do everything humanly possible to protect lives and property of Nigerians here. If the state government cannot do it, the Federal Government should step in. Human lives are so precious to be wasted in this gruesome manner.”