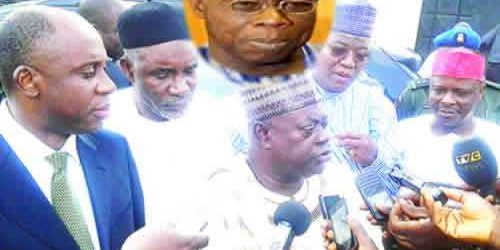 The resolution of the meeting which lasted for about two hours was not made known as journalists were barred from gaining entry into the Hilltop residence of the former president.

The governors of Kwara and Sokoto states, Abdul-Fatai Ahmed and Aliyu Wammako were not at the meeting.

The governors who drove into the venue of the meeting came in an unmarked BMW jeep driven by Amaechi.

Nigerian Tribune gathered from a reliable source that the aggrieved governors were in Abeokuta to update Obasanjo on the current state of disagreement between them and President Goodluck Jonathan.

Speaking with newsmen after the meeting on their mission to Obasanjo’s residence, Aliyu said they came to consult the former Board of Trustees (BOT) chairman of the People’s Democratic Party (PDP), as part of the nationwide consultation with leaders of the party.

“You may recall that when issues started, we consulted our elders, so this is part of the consultation, more so that we are coming to the resolution of the matters.

“We believe that very soon, we’ve been discussing with the president, discussing about these matters and we believe after the lull of the pilgrimages, we are all back, so we needed to consult again to find out if there is any variable that has intervened and we are very happy things are going normal,” he said.

On rumour that they might likely defect to the All Progressives Congress (APC), Aliyu described it as speculation, saying “I don’t know about that. It’s just speculation.”