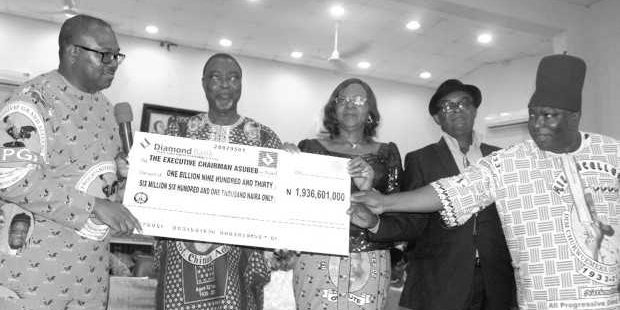 Addressing 1,041 head teachers from across the state, Obi said the action was in line with the vision of his administration to transform the state through the Anambra Integrated Development Strategy, ANIDS, which his government used as a vehicle to deliver the MDGs.

The governor, who recalled the dark days of the state prior to his emergence, said from point zero his government had been able to save N20bn in the close to eight years of his regime and attributed it to visionary planning, prudent management of resources and the goodwill of international donor agencies.

According to him, these agencies had lost faith in the state before he came due to the visionless and profligacy of past administrations. He recalled the difficulty he faced in trying to convince the agencies that it was no longer business as usual before they eventually agreed to partner with the state; a development, he pointed out, that had led to the success story of the present administration.

Obi said that with six months to the end of his tenure, he was still determined to lead the state to the Promised Land and announced plans to recruit an additional 2000 teachers and 4000 civil servants whose salaries had been taken care for the next one year, even as he said they were those who should be ready to work in the hinterlands.

The 2000 would-be teachers will bring to 10,000 the number of workers employed by the Obi administration. He said that one head teacher from each of the 21 local government areas in the state will be sponsored by the state for 2013 pilgrimage to Rome and Jerusalem as a way of encouraging them on the task of bringing up the children of the state.

The governor, who also disclosed plans to give farmers N1.5bn and another N1bn for micro credit, announced an increment of indigent people benefiting from government’s assistance in training their children in school from 2000 to 8000. He also condemned the forceful takeover of mission schools by government after the civil war.

The governor expressed the hope that his successor would be a better governor who would not allow the state to relapse to the situation of the immediate past.

In his speech, the executive chairman of Anambra State Universal Basic Education Board, ASUBEB, Nze Emeka Olisa, praised Obi for his several interventions in the education sector, particularly lauding him on the clearance of pension arrears, immediate payment of pension and non-delay in payment of gratuity.

Olisa also recalled Obi’s intervention fund to schools, promotion of teachers and infrastructural development of schools, among others.

Highlight of the occasion was the presentation of N2 billion cheque to head teachers.