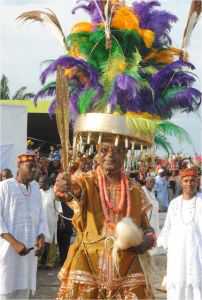 (APGA) has suffered a setback with the curse delivered on Ngige and APC by the Obi of Onitsha, Igwe Alfred Achebe.

A 53 seconds video clip in the possession of News Express shows the paramount ruler of the foremost commercial town berating Ngige, the APC governorship candidate for the November 16 Anambra State governorship election, and his party for allegedly having no regard for the traditional instituition.

Their offence, News Express learnt, was the party’s storming of Onitsha today to launch Ngige’s governorship campaign while the Ofala festival was going on.

Igwe Achebe, who spoke in English and Igbo, said: “Today, a political party has chosen to launch their campaign for governorship in Onitsha at the same time when the Ofala is going on . . . despite the long notice . . . the one-year notice about the Ofala, and he knew about it.”

The Igwe added: “Aga m arapu ya otua. Onye mebie ani, ani emebie ya,” roughly translating: “I will stop here. He who desecrates the land, the land will also desecrate him.”

The video, which was taken today, shows Governor Peter Obi, who led a high-powered APGA delegation to Onitsha for the Ofala, beaming with smiles as the royal father pours out hs heart during a courtesy call on him in his palace.