Obasi urges Jonathan to ensure rapid completion of the second Niger Bridge, which has not truly commenced 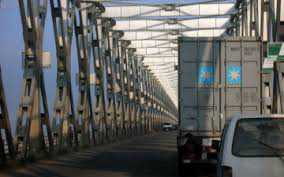 Obasi made the call in an interview with the News Agency of Nigeria (NAN) in Abuja.

He noted that the bridge was about the biggest project cited in the South-East by the Jonathan administration.

According to him, the President has performed creditably and should be re-elected come 2015.

He added: “I want to remind the President that the 2nd Niger Bridge is one of the prominent projects he has cited in the East.

“I want to appeal to him to complete the project as fast as he can because the pains we are experiencing when travelling through Onitsha is much.

“Once that project is completed, he can raise his head high and say I have done well for the Igbo land.’’

Obasi then commended Jonathan for bringing sanity into Nigerian politics.

He said “politics in Nigeria is not as bad as it is being painted; democratically, we are still young and we have a lot to learn, democracy is taking root now.

“The era of ballot snatching and rigging with impunity is gone; one man one vote is working, this time, it is about how good you are and not how many thugs you are able to moblise, or how much you are able to share.’’

Jonathan had on March 10 performed the ground breaking ceremony of the 2nd Niger Bridge in Onitsha, Anambra State.
Source: BGN

One Nigeria With Two Justice Systems, One For The Poor And The Other For The Rich
30th January 2023

Biafra: Stupidity Has Engulf The Nigeria Media Houses And Her Agent Of Provocateurs Sense Of Reasoning
8th January 2023
Go to Top