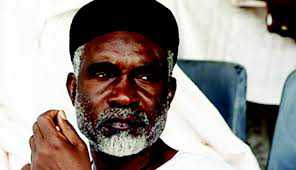 That was about three hours after the Economic and Financial Crimes Commission, EFCC, pleaded with the court against exercising its discretion in favour of the accused persons on six grounds, including that the freedom of the accused was a threat to its witnesses.

He gave their identities as Ma’aji Mohammad Iro and Abdulmalik Dalhatu, adding that they were not involved in autocrash but just died mysteriously.

EFCC expressed fear that if Nyako and the three others were granted bail, they might use their positions to cow other witnesses from coming out and that it would have difficulty prosecuting the case.

Jacobs also argued yesterday that both the former governor and his son, a serving senator might jump bail if so granted, because the duo fled the country after they were admitted to administrative bail by the EFCC while the matter was still under investigation.

He said they did not get them back until they procured a warrant of arrest from court and declared them wanted on the internet.

EFCC further argued yesterday that there was a prima facie evidence against the accused persons as investigation had shown that former Governor Nyako diverted public funds running into billions of naira into private accounts of companies belonging to them to develop an estate in Abuja.

Expressing fear that not only the grave offence committed by them but also the massive and incontrovertible evidence already piled up against them would tempt them to bolt away, Jacobs added that hiring 15 lawyers to defend the case was an evidence that the accused were ready to do anything to get off the hook anyway, anyhow.

EFCC suggested to the court to issue an order of accelerated hearing in the case and hear the matter day to day instead of releasing them to the free world and pose threat to its witnesses.

But the trial judge, Justice Elvis Chukwu, notwithstanding the litany of reasons given by EFCC yesterday admitted them to bail, albeit attached stringent conditions to the bail.

The accused persons were admitted to bail in the sum of N350 million each totalling N1.4 billion with two sureties in like sum each, one of which must be a serving director in the federal civil service.

They were also ordered to drop their international passports and other travel documents in their possession with the deputy registrar of the court if they must breathe air of freedom.

Justice Chukwu held that the stringent conditions were attached to ensure that they would attend court so that trial would not be delayed.

EFCC had, on Wednesday, arraigned Nyako, his senator son and two other individuals alongside four corporate persons on 37 count charge bothering on money laundering.

The accused persons however, pleaded not guilty to all the charges.

When the matter came up yesterday, defence counsel, Kanu Agabi, SAN, brought an application for bail for the accused, dated July 10 and filed on the same day.

Agabi predicated the application on Section 118 (2) of the Criminal Procedure Act and Section 35 of the 1999 Constitution, arguing that what the prosecution emphasised in its opposition is that the accused will not come for trial if granted bail.

He said that contrary to EFCC’s fear, the accused persons were happy to stand trial because it afforded them a rare opportunity to clear themselves.